The Residence of Art

Chiang Rai lies picturesquely embedded in the mountain landscape of the Golden Triangle. The river  Mae Nam Kok, mostly just Kok river, passes the town centre at its northern edge and after another 20km it flows into the mighty Mekong river. Thailand’s northernmost city has around 70,000 inhabitants, including many members of the mountain tribes of Meo, Lisu, Akha and Karen, the latter known for their tradition of long necks for the women. In comparison to Chiang Mai this town is rather small but I found some impressive places worth a visit.

Chaing Rai is the town where the Emerald Bhudda has been found that is now exhibited at the Grand Palace in Bangkok. At its original place at Wat Phra Kaeo a replica can be visited. Chiang Rai was the residence of the Bhuddist artist Thawan Duchanee whos work can be admired in the Black House. Beside him the town has several dozen established and well-known artists who exhibit their works at galleries adjacent to their homes and studios.  And then there are the famous temples of Chiang Rai which are far more artistic than at any other place.  And there is Wat Huai Pla Kung with its large white statue of the Goddess of Mercy.

Besides Wat Phra Kaeo, the most sacred Buddhist temple in Thailand, where the famed jade Buddha emerged after an earthquake, Chiang Rai has more to offer than its famous temples.

In the centre of Chiang Rai stands the imposing golden clock tower. The richly decorated tower is not only a landmark of the city, but also a central meeting point.  It was designed by the same artist as the Wat Rong Khun, the White Temple. In the evening, there is also a small light show.

About 4 kilometres west of the centre of Chiang Rai lies the “city beach”. It is certainly not a beautiful dream beach but still a relaxing and quiet place at the banks of the Kok river. There are some huts whith tables to sit and watch the river flow, also some restaurants and shops. In the wet season the river is not suitable for swimming as it moves fast and is brown with sediments.

Chiang Rai has several parks for relaxation or exercise. There is the small 75 Anniversary Flag and Lamp Park which unfortunately did not have its wonderful flowers when I was there. Ko Loi Public Park is directly along the banks of the river and has playgrounds for sports. And then there is a little park around the newly built town hall with an impressive old tree and a walk along the riverside behind the town hall. 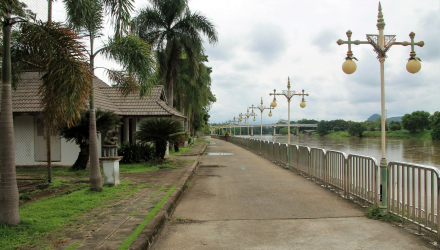 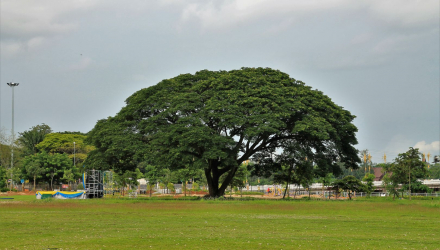 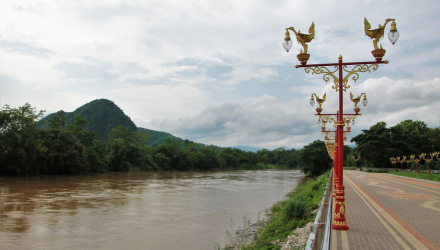 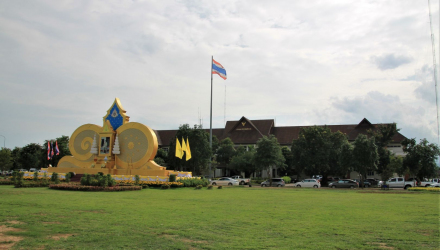 Chiang Rai has an old airport that is not used anymore because a new airport was built little further outside of the town. The old airstrip, about 2km south of town centre is still there and now used by locals and few foreigners like me for sports and exercise and other sorts of leisure activities. It gets quite busy every day in the early evening hours around sunset time. And there are always a few food stalls for the hungry and thirsty athelets to re-energize after workout.

For everyone being hungry after sightseeing in Chiang Rai, I recommend a visit to the markets. For example, the fantastic Night Bazaar is open every day. Here you will find a huge food court as well as various stalls with clothes, handicrafts and souvenirs. And every evening the shopping event will be accompanied by live music and dance performances on a stage in the middle of the market. The biggest night market in Chiang Rai is Saturday Walking Street in the city centre – a paradise for foodies and shopaholics.

The famous white temple is breathtakingly beautiful. The whole temple complex is different to any other temple I have seen in Thailand. The white symbolizes the purity of Buddha and in combination with the many silver elements it is sparkeling all over. It is really a work of art. The design is absolutely unique and you walk artistically from hell to heaven while visiting the temple. In Chiang Rai this temple is a must visit. In my opinion one of the most impressive temples in Thailand. 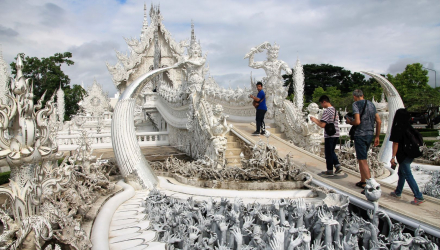 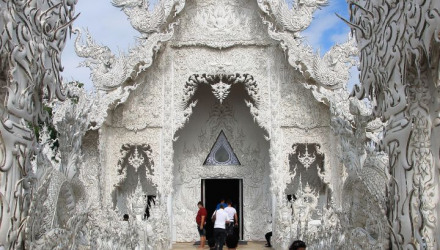 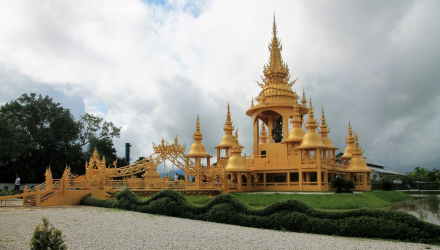 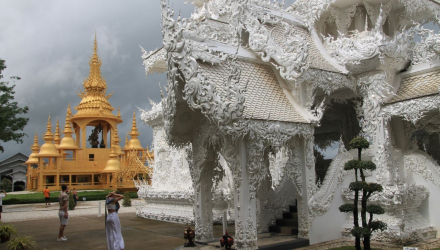 This certainly very unique location has been created by surrealist Thawan Duchanee as a counterpart to the White Temple. It is a playground of creativity, this artist must have been an excentric and provoking personality with expertise in out-of-the-box thinking.  The Black House is a collection of around 40 buildings of varying shapes and sizes dotted around a peaceful garden, some traditional Thai buildings combined with outlandish modern designs. Inside the decoration displays crocodile skins, animal bones, skins , fur, skulls, dark paintings and every so often genitals. It might not be everybodies cup of tea but that’s exactly how art makes its impression. 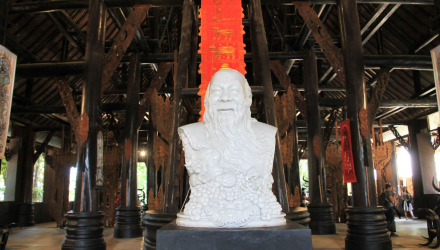 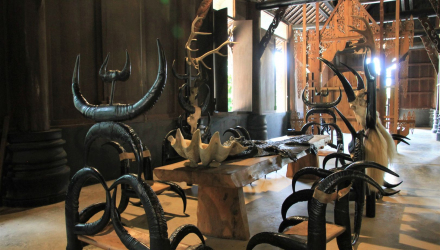 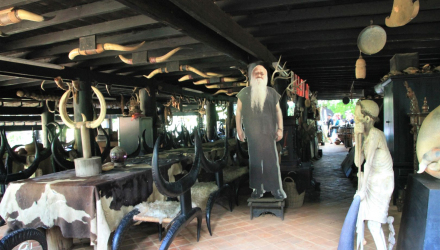 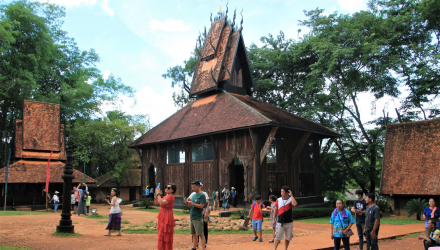 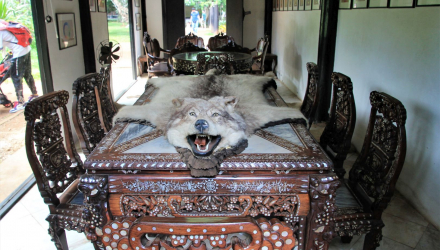 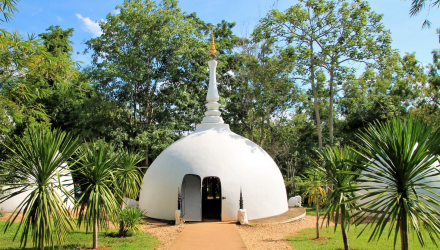 Wat Rong Suea Ten means “House of the Dancing Tiger”. The temple is similarly artistically valuable and just as fantastic in its execution as the White Temple. The creators of this “miracle in blue” were once the disciples of the builders of the White Temple. In contrast to the White Temple, the entrance is free and it is allowed to take photos, even inside the ordination hall with its large pearlescent Buddha statue. 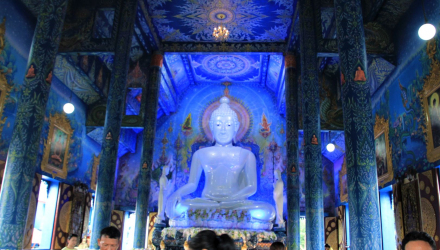 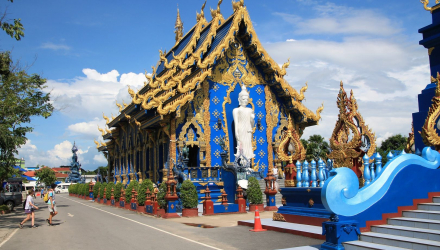 The highlight at Wat Huai Pla Kung is actually not the temple itself, but the giant statue of the Goddess of Mercy. It’s pure white, shiny figure can be seen from miles away. A staircase with impressive dragon heads leads up to her position on an artificial hill.  Inside her is an elevator that goes up to her head. From the windows up there the view at the surroundings is spectacular. Next to her is a replica of a short section of the Big Chinese Wall.

Also Wat Huai Pla Kung is worth a visit: The Chinese inspired temple, which looks like a pagoda, has nine levels that can be climbed, each with Buddha sculptures. From the top you have a wonderful view at the statue and the surrounding area. Unlike other temples, only the women have to cover themselves here. Entrance is free. A third building, a white temple with rich decoration and beautiful interior, is also part of the temple complex. 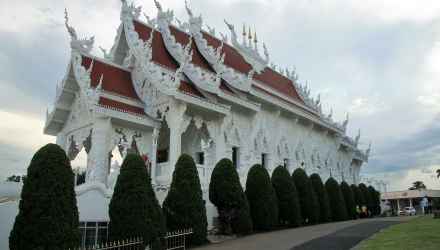 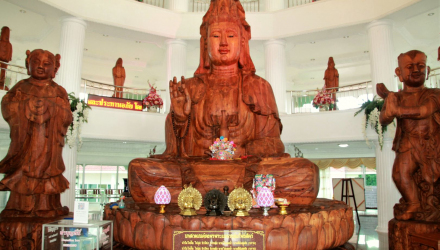 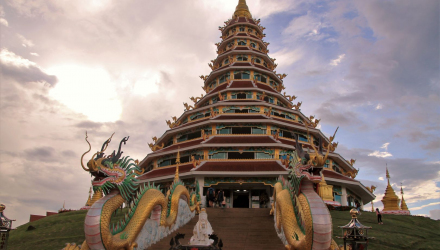 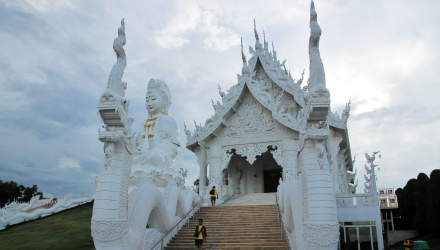 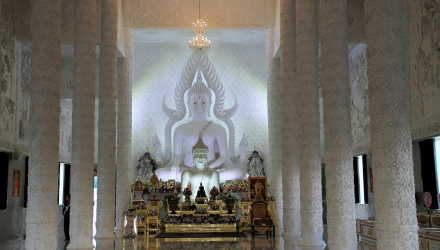 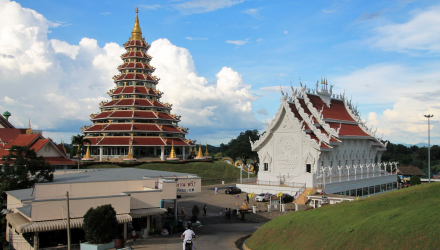 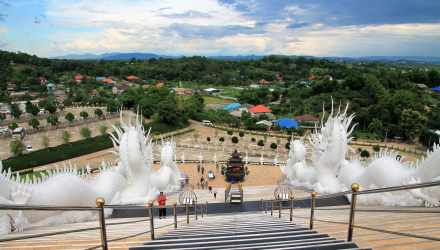 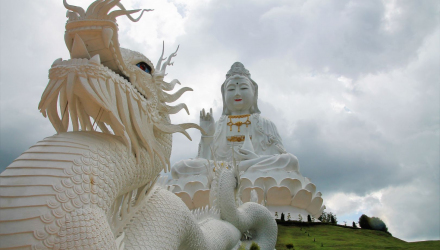 The Golden Triangle is the location where the borders of the three countries Myanmar, Thailand and Laos meet. The exact location is in the middle of river Mekong where  Ruak river  (Mae Nam Ruak) joins. The Golden Triangle is also a synonym for opium and heroin production and drug trafficking in Southeast Asia.

Today plenty of tourists come to be at the very location where all three countries meet. So did I. There are boats waiting on the Thai side, taking tourists to the middle of the river, tell them, this is it, and then take them to the Laos side, to Laos for a special market to do some souvenir shopping. The whole thing was pretty dull but the place is extremely busy with boats and it is quite expensive. We had a small boat and I had to pay 500 Baht for it. 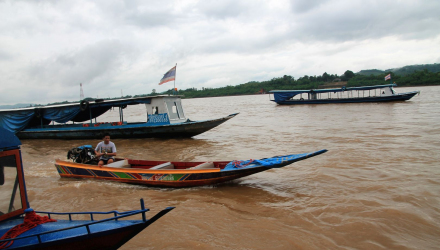 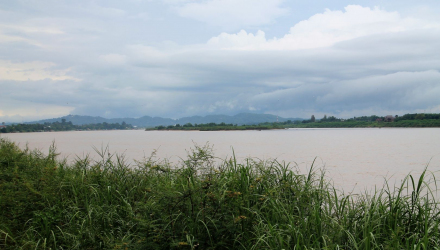 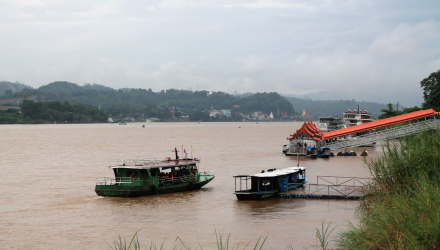 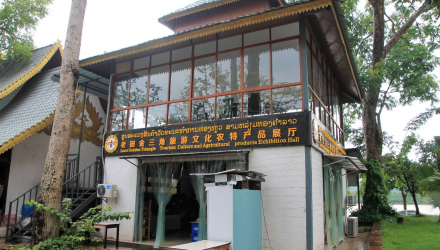 In 1988 her Royal Highness the Princess Mother visited the area. It was her wish and initiative to educate people on the background of opium in the Golden Triangle and elsewhere in the world. The House of Opium, a museum, was created to help reduce the demand for drugs through education. Naturally I was interested. The museum is small but displays some interesting facts as well as all sorts of tools and materials that are needed for production, trade and consumption of opium. But I missed  information about the consequences of producing opium for those who work on the fields and of consuming it in its various forms. And surely it could be something said about the environmental impact those massive plantations of poppies have.

Doi Tung, the highest mountain of the province is not only a popular excursion destination for many Thais; today its name is also found on coffee packs, snacks and various textiles, which are produced in this region and mostly sold in Bangkok. “Doi Tung” is also one of the most successful development projects of the royal family and was founded in 1988 by the mother of King Bhumibol Adulyadej. Its aim at that time was to create alternative sources of income for the farmers, who at that time lived to a large extent from the cultivation of opium poppy.

The heart of the extensive, mostly wooded hilly area is the royal residence with the “Mae Fah Luang” Garden, a pretty botanical garden where you can admire the rarest orchid species, shrubs and tropical plants in a manageable area. Local hill-tribes now find employment in the gardens and sell their wares at the numerous souvenir stalls.

Right next to the garden is the royal villa. It was the home of the royal mother, Princess Srinagarindra, and can now be visited in part. It is easy to see that the princess was inspired by her long stay in Switzerland when building the villa. The spacious house is a mixture of a Swiss chalet and a Thai wooden house (Teak!). An audio guide is included and I it was actually really interesting, especially the biography of that princess (which I had no knowledge about before). The view from the Doi Tung  in good weather reaches far I believe, when I was there we were surprised with another shower and mist.

Entrance fee for garden and house is 90 Baht each. Like at a religious place, for the villa shoulders and legs must be covered.

How to get around

Certainly there are taxies around and busses but I found the best way is by bicycle or scooter.  For the city center walking is the best option. To go to the Black House or White Temple I was the proud driver of a scooter, many years after I drove last time, so much fun but I had my hard time! For the Blue Temple and Wat Huai Pla Kung I rented a bike. Doi Tung and the Golden Triangle are too far away therefore I had a car and a driver, which was fast and convenient.

I felt really comfortable at the Pimann Inn Hotel. The place has houses with four rooms each which are big, clean, comfortable and each has a balcony. The hotel has a huge pool, a modern, big gym and a seperate course room. The food in the restaurant is good and affrodable. Next door is a restaurant  with very good local food and live music every evening, modern Thai bands play there. The hotel is directly next to the old airstrip about 2km south of city center but walking distance. Also not far from  the Chiang Rai Central Plaza shopping mall. Best choice for me, I loved staying there.

I really would like to travel differently but a flight is such an unbeatable cheap and fast method of transportation here that I take a flight to go to Phuket Island.