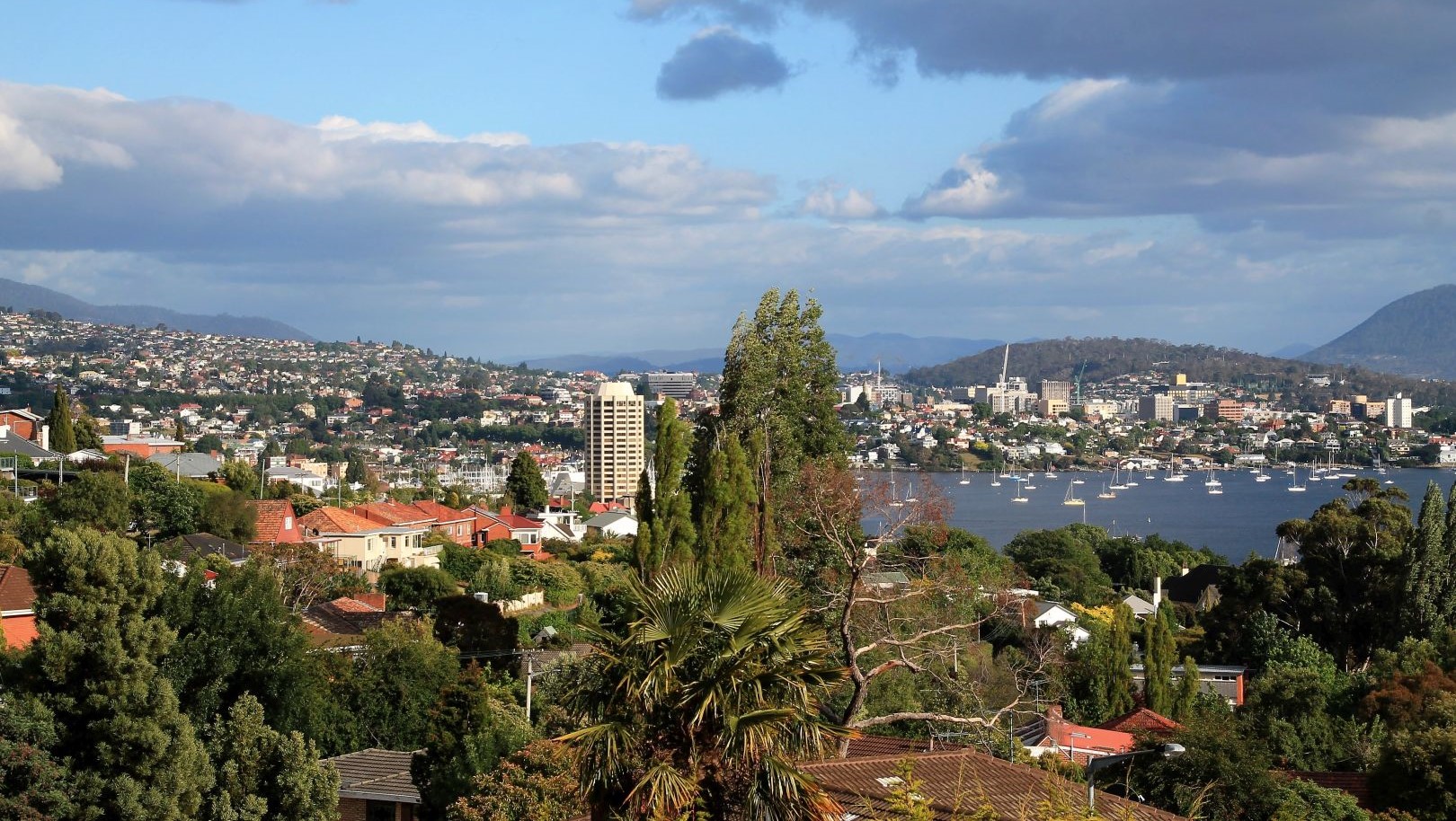 It was Christmas time. Did you know that there is another Santa Claus who lives at the South Pole and drives a Harley Davidson?  Every year at Christmas time he can be seen driving around in Hobart!

Hobart is the capital and most populous city of the Australian island state of Tasmania. But from all state capitals in Australia it has the lowest population. Hobart is located in the south-east of Tasmania on the river Derwent, making it the southernmost state capital of Australia. When driving into Hobart one will cross that river on the giant Tasman bridge. Hobart is a gateway city for  the Antarctic, boats depart and many scientists live here. It is also Tasmania’s hotspot for tourism. Hobart has a fascinating and well-preserved historic architecture and is home to the famous Sydney-Hobart Yacht Race every year in December shortly after Christmas. It is one of the most challenging yacht races on earth. Hobart is also well-known for Mona, the Museum of Old and New Art, a famous and very controversial exhibition. I did not visit as I found it too expensive and I am not so much an art person. I rather went to see the spectacular nature that Hobart is surrounded with.

This is the walk I really wanted to do and one of the main reasons to come to Hobart. If I would have informed and prepared myself a little better I might have opted to do the Three Capes Walk. But certain things one only learns after arrival. In any way, this hike is definitely a fantastic and scenic one worth doing.

The hike starts from Fortescue Bay within the Tasman National Park. It is about 1,5h drive from Hobart in the direction of Port Arthur.  About 4 km before reaching Port Arthur there is a gravel road with the wonderful name C344 that leads into the forest on the left hand side. It can only be accessed by car, or alternatively with one of the tour busses for the Three Capes Hike. I was lucky to have met Bart, a Belgium traveller, who happened to be in Hobart and wanted to do the same hike. He had a car and we shared the costs and the adventure of the hike.

The trail to Cape Hauy starts at the car park near the campground of the wonderful Fortescue Bay. It takes 2h one way and is about 10km for the total distance.  It has many steps climbing the mountain up and down in both directions.

The beauty of the trail lies in the cliffs of Cape Hauy. After the first hour through the forest and up many stairs, the trail opens and gives way to a breath-taking view onto the cliffs ahead. Towards the end, the track runs very close to the abyss, providing staggering views down onto the swirling sea.

The trail eventually ends in a small plateau that serves as a lookout, with a steep drop right behind its fences. We had a wonderful view at the exceptional rock formations named Candlestick and Totem Pole. Most astonishing, we could see rock climbers just above the swirling ocean in the gap between the pillars in their attempt to climb them. I think the cliff is more than 100m in height and the edges of the platform fall vertically into the ocean. Standing there and looking down gives a tingling feeling in the belly. The Hippolytes, large formations of rock, severed from the mainland like two islands, could be seen just east in front of us.

On our return, we took some time to relax at Fortescue Bay. The beach is nearly as nice as Wineglass Beach, a beautiful arch with nearly white sand and perfectly shaped waves of crystal clear, turquoise waters, constantly rolling in. It was a bit too cold and windy for swimming but the beach is just too lovely to be not used for some relaxation after the hike.

Launceston has the Gorge and Hobart has Mt.Wellington. The mountain rises to 1,271 metres above sea level and is frequently covered by snow, but not on the days I spent in Hobart. I believe I had the luck to experience some of the hottest summer days that Hobart has to offer, the climate on top of the mountain was pleasant, refreshing cool with little wind and a great view, a little hazy though.

As my friend Bart was still around, we drove up the mountain together by car and had a walk around on the top, instead of undertaking the hike uphill. It is certainly also possible to hike up to the summit which would take about 2h, but certainly the meaning of climbing Mt. Wellington has faded with the construction of the road.

We had a look at the visitors centre and all the lookouts in each direction, and we followed the Zig-Zag Trail for a little while downhill but returned, and also tried the S.Wellington Track towards Smith´s Monument for about 30 minutes as the landscape on the top is amazingly fascinating. It looks like endless fields of massive-sized boulders lying around all over the place, and sweet little green bushes with flowers in-between. We sat on those big boulders high above the ground and took in the magnificent view.

There are many more certainly fascinating trails on and around Mount Wellington and one could spend easily days of hiking. Alternatively, we saw people cycling uphill (crazy) and also downhill (easy). And I have read somewhere that even horse riding is possible.

On the top, there is a massive concrete TV/Radio that can be seen even from far away. It looks like a massive rocket. The view from the top is spectacular. Even though my old friend, the haze, was back and blurring the horizon, we had a great view at Hobart, the River Derwent and the surroundings.  There is an interpretation centre at the top that offers protection from the blustering winds if needed, and several viewing platforms.

Originally I had planned to go to Port Arthur but from the distance that adventure did not look promising and paying 40$ entrance fee for visiting the ruins of an old prison was not very tempting. So I decided to go on a boat cruise at Bruny Island. That turned out to be an excellent choice.

Bruny Island Cruises is a 3 hour wilderness cruise starting from Bruny Island Adventurers Bay and goes along the coastline and beyond the southernmost cape into the Southern Ocean. Again, Bart and I shared car and costs, and we drove all the way to Kettering and then took the ferry to Bruny Island. Waiting time at the ferry was about an hour, we were just in time at Adventurers Bay to catch our boat.

The cruise took us alongside some of Australia’s highest sea cliffs, beneath towering cliffs and close to the awesome ‘Breathing Rock’: An underwater cave that powerfully ”breathes out“ the air when a wave presses water into it.  We saw deep sea caves, but could not enter as the sea had too much swell, the sea was very choppy and turbulent. The way out was against the wind and I had purposely placed myself in front of the boat to have the full excitement. I learned that Ginger tablet really DO help to prevent sea sickness!

It was very cold but we were provided warm jackets and each of us also received a wind-and waterproof “Santa Suit” (big red cloaks) that kept us dry. The ride was very bumpy but it was all worth it. I felt the power of nature at the point where the Tasman Sea meets the might of the Southern Ocean. The way the ocean moved felt as if a HUGE organism is breathing. It lifts you up and down, and with a fast boat as ours we drove up the waves and plummeted down on the other side, so much fun! I have never been on the ocean in such waves.

And we saw a lot of wildlife. We were really lucky I believe. We saw plenty of seals resting on a cliff far out in the Southern Ocean, we saw many seabirds like Black-faced cormorants (we first thought those are penguins) and a gigantic Albatross.  And on our way back we were accompanied by some dolphins that playfully jumped around the boat. It was the most amazing experience I had so far in Tasmania.

After we returned to Adventure Bay we drove all the way up to Cape Bruny Lighthouse on the southernmost point of the island. From there we could see in the distance the cliffs again that we had visited with the boat before. It is a wonderful 360° view from there.

The way back is very long. We aimed for the last ferry and arrived half an hour before departure time. But in front of us were more than 40 other cars and no way for us to fit on that ferry! We feared to be stranded on the island for the night! But luckily the ferry people brought in another ferry so that all cars could leave the island. There were quite a few cars even behind us.

Sadly the very next day I had to leave beautiful Tasmania and flew back to Melbourne for Christmas, and then to Adelaide for my adventure in the Australian Outback.