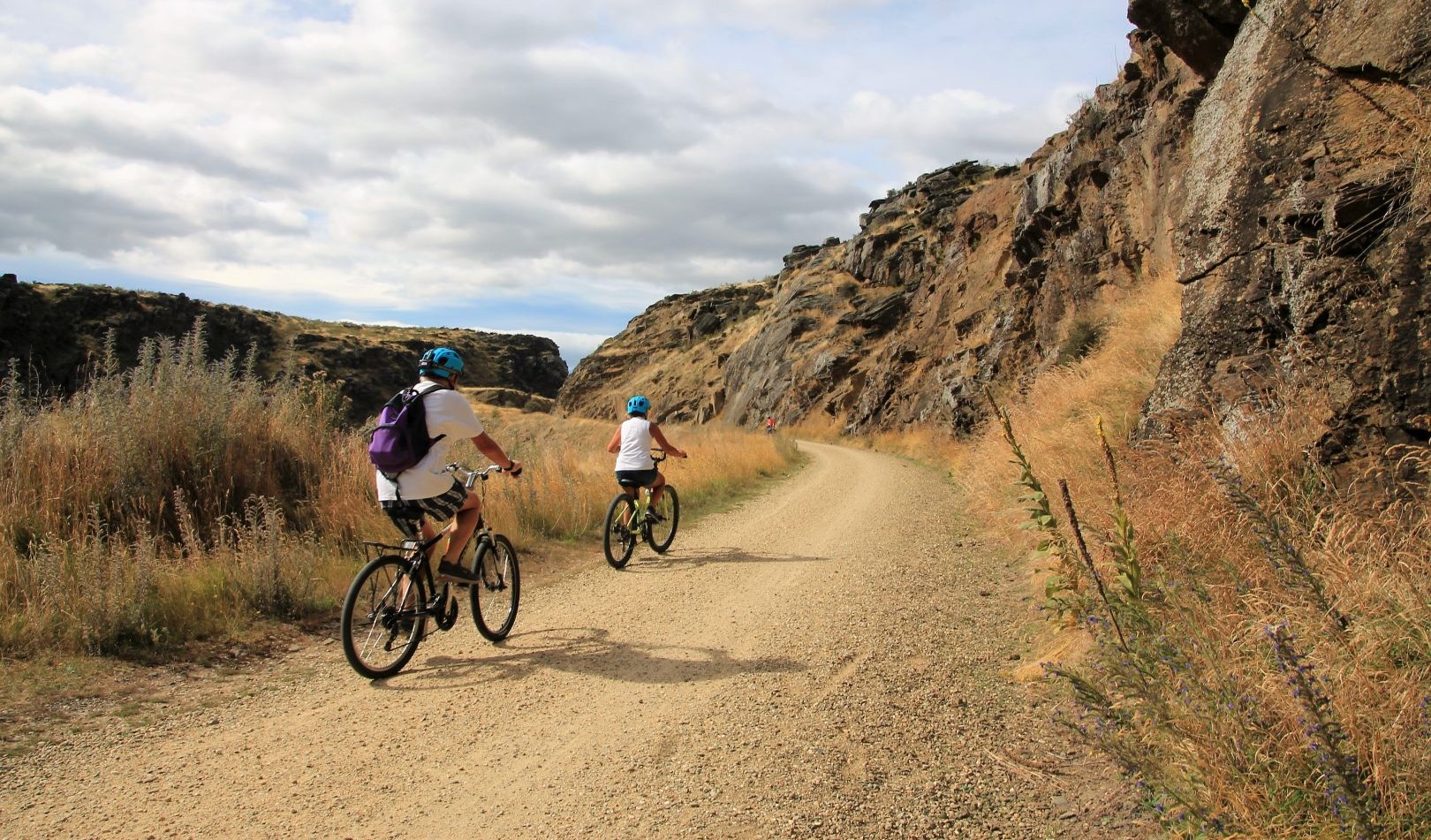 From Clyde to Middlemarch

The Central  Otago Rail Trail is New Zealand’s first Rail Trail. The 152km long trail follows the former route of the Otago Central Railway. Opened in 2000, the former railway line was ideal for New Zealand’s first off-road cycle path and walking trail. It is a wide gravel road with only little declines or inclines, but with tunnels and bridges as they used to be when it was a railway track.

The Otago Central Railway was in operation from 1870 until 1990, built during gold rush times, and lasted until transport on the road became more economical and faster. Eventually, when the Clutha river dam in the little village of Clyde was created, the railway tracks were removed and the waters of Lake Dunstan flooded the area. Today, the trail starts behind the dam in Clyde and ends 152 km southeast of it in Middlemarch. From there still a train runs several times a week to Dunedin I was told.

Summers in Central Otago are typically dry and sunny. The Southern Alps along the west coast shield the area against the wet winds coming from the northeast. Cycling the Otago Railway Track takes usually five days but I did it in three days. And my three days were such wonderfully warm and sunny summer days. I saw schist rocks, loads of yellow grassland, rolling hills, and green canyons with rushing rivers against a dark blue sky. I saw eagles in the sky, loads of sheep and rabbits along the way, and sometimes kettle. As I cycled, I came along all the historic places of the gold rush times, the old stations along the track, and some of them were renovated and turned into museums, accommodation, or art galleries.

I got my travels along the track organized by SheBikesHeBikes who provided an excellent service and made it easy for me. They stored my luggage during the time, arranged accommodation along the track and made sure that I and my bike were transported back to Clyde at the end of the trip.

I started in Clyde and I think it was the best choice for two reasons: First, the main direction of the wind was in my favor, and second, I found it worth exploring the historic town of Clyde. Clyde was settled in 1862 when gold was discovered in the Cromwell Gorge and still has many of the charming historic building s from the time. I took a walk along the Clutha River up to the hydroelectric dam and from there up to the Clyde lookout. In the other direction, I walked until the red bridge crossing Clutha River. And as my landlady volunteered in the local museum, I went there too and learned about the time of the gold rush and the town’s history.

The very next day in the early morning I started my cycling adventure. I cycled 55-65 km every day. That is not very much so I added all detours that were recommended: the first was the river trail between Clyde and Alexandra because it is much more beautiful nature-wise. The second was the tour to Ophir to see the historical building s of this village and the impressive suspension bridge. I also did all the recommended hikes along the track. Some led me down into the gorges and river banks, others up the rocks to enjoy the views. I had a lot of time to do so and it was just beautiful and exciting. In Middlemarch, I added another 20km to see the Salt Lake and hike around it. It is a lake filled with saltwater. No one could explain why. But it is the only salt lake in NZ and definitely worth visiting as it is located in a picturesque landscape of schist rocks which are dotted into a vast area of grassland.

Along the railway track, I stayed the first night at the Old School House in Lauder. The house looks tiny but really has been a school in the old days and still has that school taste in the air. It is now run by a lovely couple as accommodation for cyclists.  My second night I spent in an incredibly beautiful garden of a lovely huge farmhouse in Waipiata. In those remote areas, I had an unpolluted view at the Milky Way and the stars of the southern hemisphere at night. This totally different appearance of the night sky and the dark, undisturbed view were simply amazing!

Cycling was easy as the track has no relevant ups and downs, as railways tracks were always built with only low gradients. The track is wide and the gravel cycles without a problem. It was not exhausting or difficult but incredibly fulfilling and rewarding. Being out in nature all day cycling was certainly a most wonderful experience. I could not get enough of it. Despite the fact that there are many other cyclists on the track in both directions, I sometimes still had the track just for myself, enjoying nature and some physical activity, chasing sheep or singing aloud, feeling the wind in my hair and the sun on my skin, breathing fresh air and fighting the gravel, feeling alive. I will do it again.

From Middlemarch, my bike and I were taken back to Clyde to the office of SheBikesHeBikes where my luggage was waiting. From there they took me on the bus to Queenstown and dropped me halfway in Cromwell. My intention was to take the Intercity Bus the next morning to the beautiful lake-side town of Wanaka.