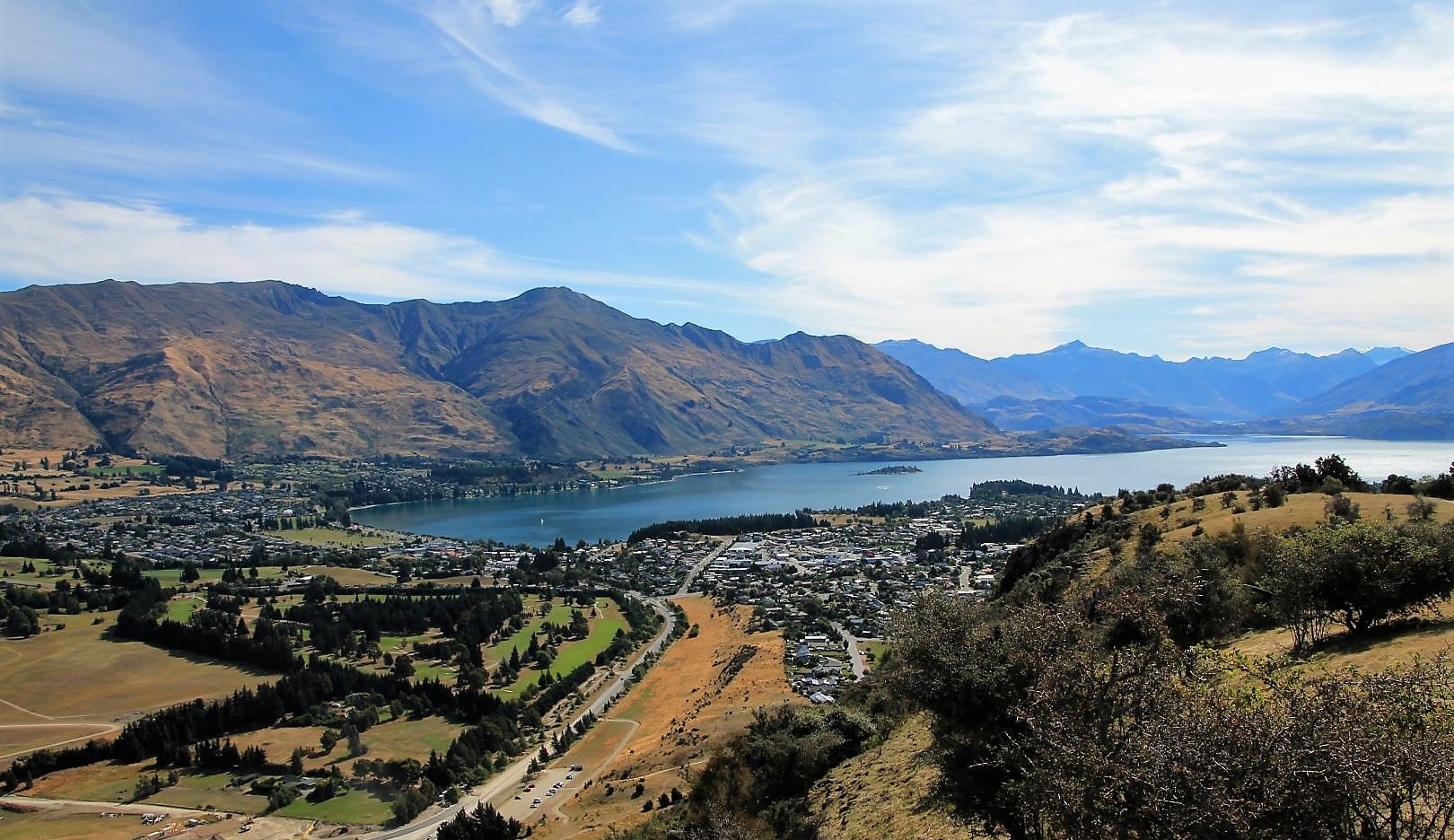 Just 50 minutes’ drive from Queenstown over the magnificent Crown Range, Wanaka perfectly complements the neighboring capital of Adrenaline. Located at the shores of beautiful Lake Wanaka, and set against the alpine backdrop of Mount Aspiring National Park, it is a beautiful and also very peaceful place. It has a comforting mix of restaurants, cafes, shops, but contrary to Queenstown it provides a rather relaxed and friendly atmosphere, most valued by artists, families and outdoor enthusiasts.  Wanaka has plenty of ambient areas to relax, wide-open spaces and the breath-taking scenery of mountains and rivers around. Most famously, The Wanaka Tree is a small tree that stands offshore in the shallow waters of the lake became the symbol of Wanaka as a gem of natural beauty, and a goal of photographers pilgrimage. Most exciting, the late summer weather was still very warm and sunny, especially in the late afternoon, and I managed to jump into the freezing cold lake for a swim – very refreshing.

Queenstown has Ben Lomond and so Wanaka has its mountain too: Mount Iron, an impressive, glacier-carved, rocky knoll that rises 545 m above sea-level. It was named after Ironhurst in Scotland and is not, as one may think, made of Iron. It took me about 2km to go to the trailhead and the trail up to the top is a steep 4.5 km loop. It´s a very popular short hike among tourists and locals, and some even use the trail for jogging exercise. And so I undertook this adventure on my first afternoon in Wanaka. On a clear day, it provides an excellent 360-degree view at the surrounding mountain ranges, the Upper Clutha Basin, Lake Wanaka and Hawea and the mountains of the Southern Alps.

Cycling Deans Bank and to Hawea and back

Cycling in New Zealand is one of the best activities to encounter the outdoors, especially mountain biking. So I wanted to experience a real mountain bike trail and decided to combine it with a cycle trip through the beautiful countryside along the river to the neighbouring lake Hawea and back, on a real mountain bike loop near Wanaka: Deans Bank Track. My first experience of this kind.

It was a challenging day, I cycled about 65km that day, and 11km of it was on Deans Bank Track. I started riding along the shores of Lake Wanaka at Roys Bay, around the peninsula to the mouth of Clutha river, and then along the river up to Albert Town where a bridge crosses the waters. This trail is called the Outlet Track, a wonderful path with absolutely beautiful scenery, grand views at the mountains and some sweet little beaches on the way;  a truly scenic ride of about 12km. I crossed the bridge at Albert town and started my adventure at Deans Bank. What the f**! I quickly realized that this track was made for intermediate and advanced riders. Me, being a beginner and alone out there, must have been an absolutely hilarious sight. The track is very beautiful, one-way cross country but with some technical difficulties. Hence I had to push my bike sometimes because I could not do the tight bends, the jumps and the steep ups and downs on gravel. But the longer I was on the track the more confident I grew and the better I became. Less and less I had to get off my bike and push. And looking back now, I can say, it was fantastic! I was physically challenged, I was panting, but it all felt great! And even more, the track has beautiful views at the Clutha River.

I had a little picnic lunch near Alberts Town and set off to my second challenge, the ride to Hawea and back. Unfortunately, I got lost twice adding unnecessary kilometres to my ride. I mistakenly rode along Clutha River, I waded through water and climbed the upper Clutha river track only to notice eventually that I was on the wrong path. But I found my way back and onto the Hawea River Track. The challenge was to complete the ride and be back at dinner time. It is a stunning trail that follows the river and that makes it so beautiful. The way towards Hawea has more uphill sections which made the way back to Wanaka more downhill and therefore easier.  At one spot I could surprisingly see surfers trying dangerously to surf a low cascade and its wild, white waters. Thrilling! They could hardly make it out of the water as the river moves so fast. Its colour has an amazing blue which looks so beautiful among the bright yellow grass, which is dotted with the dark green of trees, and underneath the deep blue sky with its puffy white clouds, all surrounded by a beautiful mountainous panorama. This trail is a real MUST DO. It is easy to cycle, wide and gravelled with a few ups and downs.  The water of the river alongside is so clear that one can see the rocky bottom from the suspension bridge, even at the deepest point in the middle of the river. When I arrived at Lake Hawea I felt this place is rougher and wilder but is as clear and beautiful as Lake Wanaka. Lake Hawea’s outlet actually feeds the Hawea River and a dam produces electricity exactly at that spot. Having the wind in my favour on the way back I made it back to Wanaka just half past six and was perfectly exhausted and ready for a nice big dinner. I was proud of me having mastered the trail and the path to Hawea and back on just one day.

It’s not high, technically, but in reality, it is. Roys Peak erects 1576m above sea level. The hike up the mountain zigzags over 8km and in total it took me little less than 6h return, including all breaks. The hike is rated as a hard one but technically it is not. There is a broad path leading all the way up. No obstacles. But of course, it is hard – meaning exhausting – to walk uphill for 3 hours. Further up it gets colder too. I was in good company with many other tourists of all ages and abilities, heading for the summit. I felt like on a pilgrimage up to some holy mountain summit in the morning.

I had decided to take the taxi transfer at 9 am from the tourist office to the car park at the trailhead. The first people came already downhill from their sunrise session at that time. All smiling. Once I was up on the summit I understood why. The girl that sat down next to me – we all sat down for the summit feast, had bread and salami – said ironically: Pretty average view, right?” We smiled. What she meant was, it was spectacular and worth all the effort, sweat and pain. Well, the real pain happens to most people on the way down because that is when they feel their knees. But for me, it was fine this time. The gradient is almost moderate all the way in comparison to the Tiki Trail in Queenstown.

All in all, it was an absolutely grand feeling having achieved to climb the summit of Roys Peak, especially the last meters on which I chose a very narrow path being a shortcut. The view at Wanaka and the huge Lake Wanaka was stunning, with the mountains and the glaciers in the distance, I could even see a little bit of Lake Hawea, and all this on a wonderful sunny and clear day. I could not feel any better.