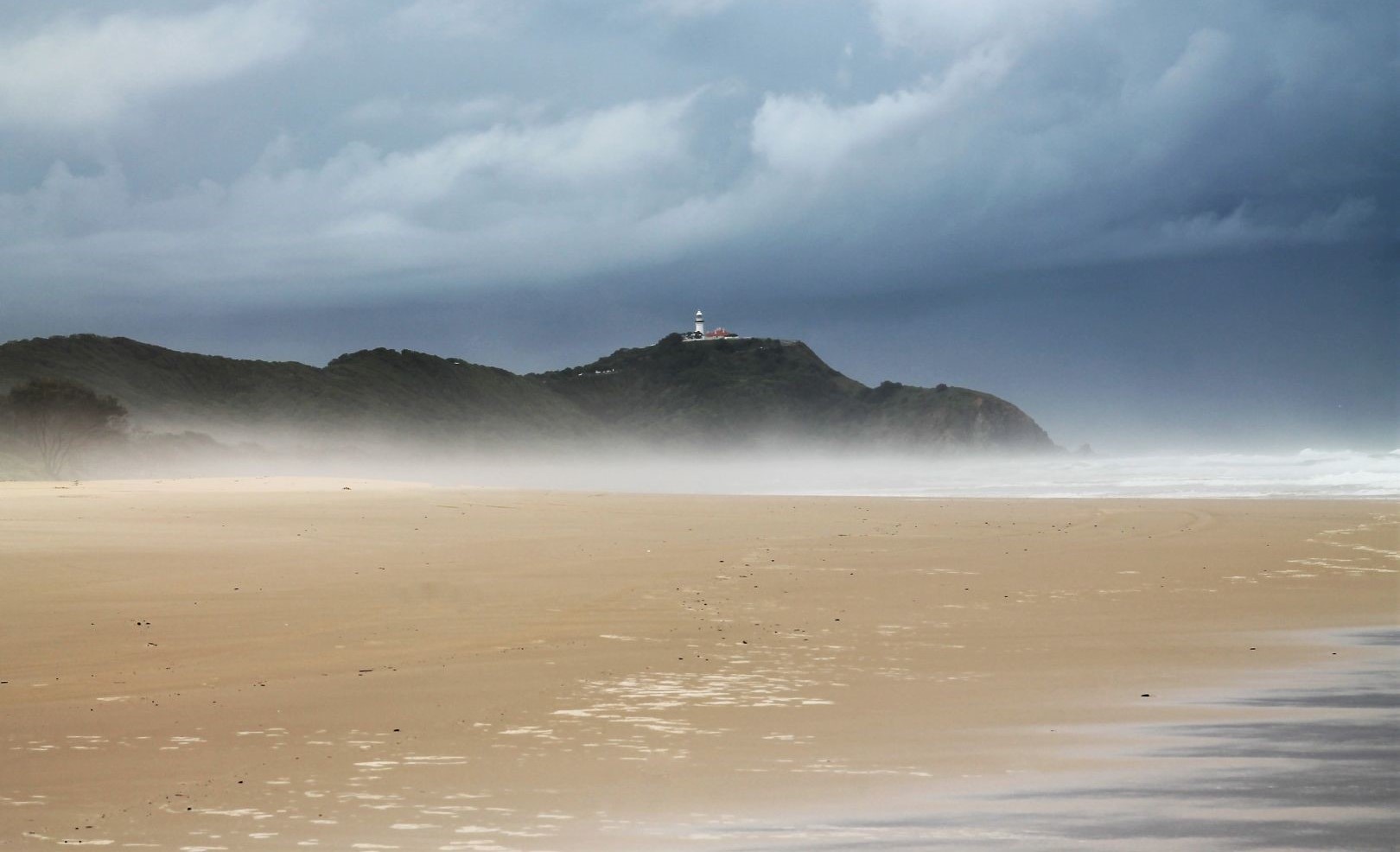 About 90km south of Surfers Paradise, just after passing the border into New South Wales, there is the little town of Byron Bay. It has the appealing reputation of a hippy, happy, alternative town for relaxation, surfing and arts, maybe some yoga classes. Walking up the main street it is indeed relaxing to sit at the beach and watch the surfers. Doing so at the time I was in Byron Bay was a short pleasure between rain showers that followed one after another. Naturally, there were not many surfers out.

Really beautiful in Byron Bay is the walk to the lighthouse. Many people even use this walkway for exercise and go running up to Cape Byron and back. Certainly, I followed their example, and hence, I went up to the lighthouse several times. Once up on the cliffs, the view at the coastline in both north and south direction is spectacular. In one direction there is Main Beach where the surfers usually are, and in southern direction, there is Tallow Beach, a broad, wild and untamed stripe of sand that is part of Arakwal National Park.

There is not much else to do in Byron Bay. I could not figure out why so many people love that place so much. It is really relaxed, yes. Certainly, it’s a wonderful thing that there are no skyscrapers but unfortunately, there is not much else to do. There is a cinema and a library and one can go out every evening. Eat, drink, sleep, repeat. But that’s not the main purpose of my travels and rather boring. I could do that at home too. Due to the weather and the oceans swell the dive center did not offer any dives on the days I resided in Byron Bay.

So I went to see the historic lighthouse and enjoyed the phenomenal view. The weather was stormy and wet and therefore it was even more impressive on the lookout, seeing the clouds and waves, feeling the strong wind and tasting the salty air. From the lighthouse, a walking path leads down the grass-covered cliffs to the Most Easterly Point of the Australian Mainland at Cape Byron. A MUST visit.

The other day I rented a bike, a so-called Beach Cruiser. It had really fat tires. I went to explore the Arakwal National Park. As I had a beach cruiser I certainly had to cruise the beach and went for Tawal Beach. I met some Wallabies again. I followed Tallow Creek, a peaceful but strong stream that cuts through the beach. It is so strong that one can actually not cross it. It’s absolutely fascinating seeing how it takes the sand away. I could see the rain clouds coming over the ocean while cruising along the beach. In the end, I got completely wet, soaked in rain. But cruising along the beach on that bike was so much fun! Never done before!

Due to the weather, I could unfortunately not proceed along the east coast to South West Rock and do the famous dive at the Fish Rock Cave. The dive became too dangerous and visibility was zero and hence, all dives where canceled. My visa did not allow me to wait for a couple of days or a week. I booked a flight to Sydney instead and stayed there for the last four days, before I departed towards New Zealand, Queenstown.