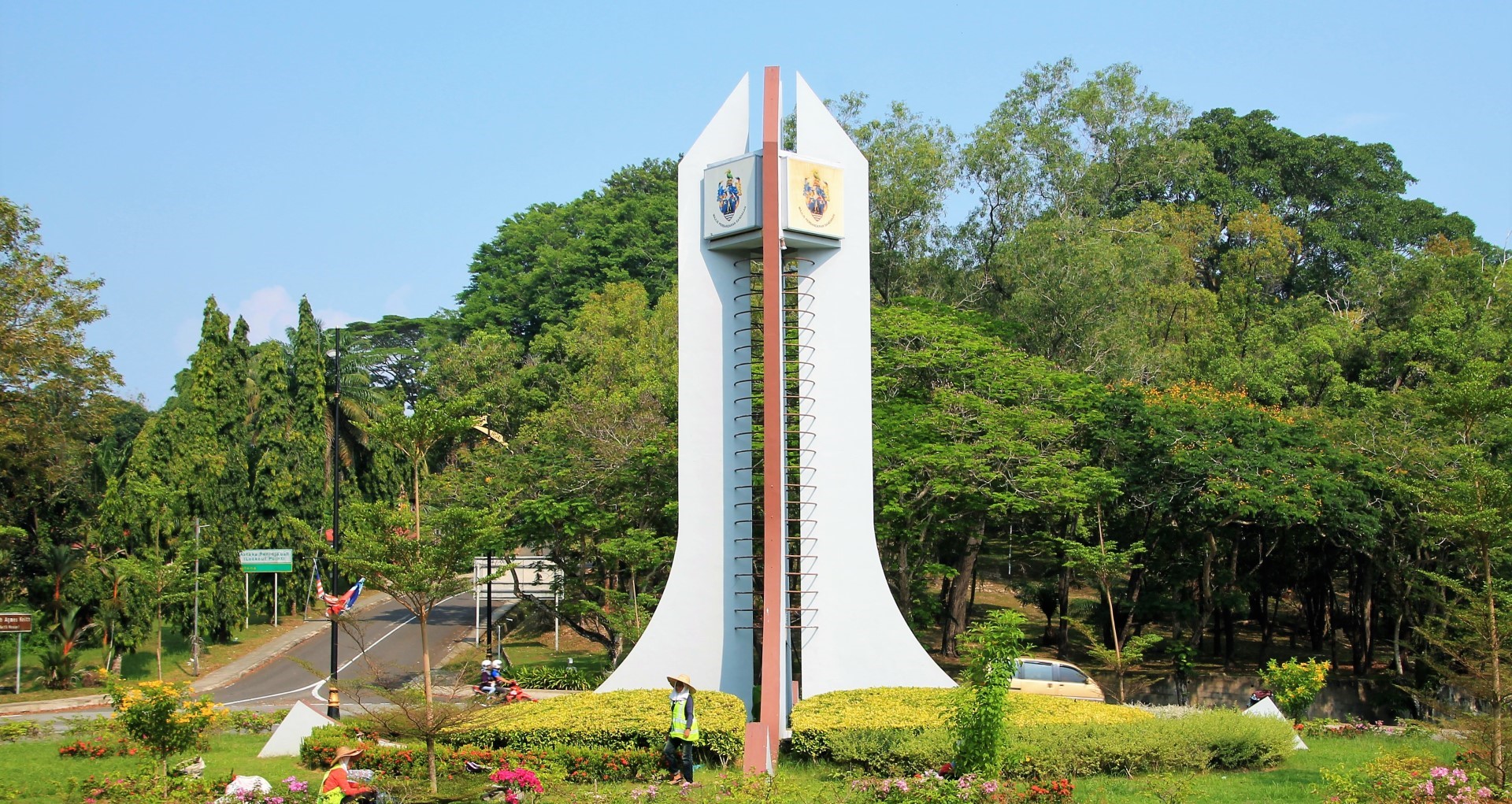 It takes 43 Ringgit and a lengthy bus ride of 7h to cover the 330km distance between Kota Kinabalu and Sandakan. The ride took me around Mount Kinabalu so that I could see its beautiful summit on a sunny day while I was grounded. Good for the hikers who were on the top that moment enjoying the view. The rest of the journey took me through endless palm oil plantations. For my European eye those palm tree forests look beautiful but knowing that all this once was rain forest gives another perspective.

Sandakan is a small town at the east coast of Borneo. The sound of Sandakan has a magical flair, it associates with fairy tales of a foreign country, with wild tropical forest, untouched nature and traditional colonial-style settlement in-midst of untouched wild jungle and palm-fringed beaches of crystal clear waters. The name also reminded me the books and the TV series about the fearless pirate-hero Sandokan, the tiger of Malaysia, who fought the oppressive and ruthless British government to free his country from the chains of their exploitation. I was one of the thousand kids falling in love with the film, the music, the island and Sandokan itself of course. He was our Jack Sparrow at the time.

When I came to Sandakan, I found quite the opposite of what I expected. Sandakan was completely destroyed during WWII and its reconstruction is ugly and shabby. The town is dirty and smells. I also found there is not much to see or to do. I had time for jogging at the sports ground that is open to the public, despite the haze which was still there and made the sky grey.

Most tourists use Sandakan as a hub to visit the amazing wildlife around the city: observe the great apes at the Sepilok Orang Utan Rehabilitation Centre, spend a night at the Seligan Turtle Island or the cruise the Kinabatangan river.  All this can actually be done without staying in Sandakan as there are resorts and homestays at all three places.

Being already in town I took the time to explore its streets and places. I decided not to go to Turtle Islands as the pricing was ridiculous: 745MYR for a boat ride of 30km and one night on the island to see one turtle laying their eggs at night. But all other things I have done and more.

The town is very provincial and the town centre includes not more than two main streets. There are shops and restaurants, two or three big supermarkets and also a big shopping mall. Along the water front are a few restaurants featuring ocean view but it smells and therefore it is not so much a win. Alternatively, the NAK Hotel, where I stayed, provides a rooftop terrace: the Balin Rooftop Restaurant. From there the sunset can be enjoyed best with a nice glass of a fancy cool drink.

Sandakan was once an important port and played a major role in Borneo’s history. So it is the history rather than the present that is worth to be discovered. The town has tried to put places together that are connected to its cultural heritage. The result was the Heritage Trail leading to different points of historical importance. I have followed the trail using an online map as the trail is not very well marked. On my way I visited the Chinese Sam Sing Kung  Temple, the St.Michael’s & All Angels Church, one of the few all-stone  buildings in Borneo, the Agnes Keith House, the wooden villa of an American forest conservator and novelist, and nearby the English Teahouse and the Rotary Observation point.  I stopped at the teahouse and very much enjoyed the view from the hill above the town and also a nice cool drink and a salad, a very welcome difference to my daily rice and noodles diet. It is a little bit more expensive though but worth it.

A 45min drive east of Sandakan, at the edge of the Sepilok National Park, the famous Sepilok Orang Utan Rehabilitation Centre invites to observe the “Man of the Forest”. It was founded 1964 by Barbara Harrison to rehabilitate orphaned Orang Utans.  Since then the Orang Utan Rehabilitation Centre cares for orphaned or injured Orang Utans or for those that were illegally being kept as a pet. They are kept semi-free in a natural forest environment until the time for their release has come. The young Orang Utans are raised and trained by older Orang Utans in an “Orang Utan Nursery” where tourists can watch their play from a safe position behind soundproof glass. I very much enjoyed seeing there play and interaction and I found it also interesting to study their behaviour as it is often so similar to humans!

Nearby in the forest there is a feeding platform for adult Orang Utans that already have been released. Twice a day some fruit and vegetables are laid out the wooden platform and Orang Utans can choose to come and eat.  We tourists are led to another platform close by and can watch them from a distance. I went there for the entire day and watched the feeding in the morning and in the afternoon. Apart from a lot of makaks one female Orang Utan came in for the morning feeding, and one big male Orang Utan in the afternoon. He was quite relaxed, sat down and ate slowly and peacefully. Entrance fee is 30 MYR, the centre opens at 9am and closes during noon,  and then re-opens for the feeding in the afternoon at 2pm. Time at noon can be spent in the restaurant at the entrance or by paying a visit to the Sun Bears just next to the Orang Utans Rehabilitation Centre.

I took the public bus (mini van)  to go to Sepilok in the morning before 9am, the ticket is 6MYR. The last bus back is at 4pm. The bus station is opposite to the NAK Hotel where the Balin Rooftop Restaurant is. As I was staying there it was more than convenient for me. A Grab car costs 22MYR and if shared between 4 the price is the same.

The Bornean Sun Bear Conservation Centre is adjacent to the Orang Utan Rehabilitation Centre in Sepilok. Similarly it aims to rescue Sun Bears wherever they are treated wrongly and provide them a refuge where they have a safe, natural environment and treat them in a way that enables them to be released into the wild again. Sun Bears are the smallest type of bear and are at the brink of extinction due to hunting and destruction of their habitat. The centre has two enclosures for the bears which are kept as natural as possible, and two observation platforms for the tourists. There is no feeding as such but the enclosures are small so that bears can nearly always be seen. I learned that some of them, unfortunately, can never be released into the wild again as they are too old and too used to humans. For them the place is their final destination. Entrance fee is 30MYR.

The privately owned Probosics Monkey Sanctuary is located at Labuk Bay off the road for a few kilometres. It takes 15 min for a taxi to go there, and from the ticket counter it is another 3 km to the entrance. Taxi drivers tend to refuse to go there or charging hefty fees like 100 MYR insisting on a return drive. The entrance fee is 60 MYR. Even though I really wanted to see the remarkable monkeys with their big dangling noses and reddish flat-top hairstyles, I have skipped it due to the costs. Probosics are indigenous to Borneo. I hope to see them later in the wild roaming free.

The Rainforest Discovery Centre is at Sepilok not far from the Orang Utan Rehabilitation Centre. They could be combined for a visit but I went there on a separate day to spend more time. The centre has one of the most well-preserved rainforest of Sabah, with giant trees and wild animals living in it. The centre has an educational background and is used to teach kids and students about the natural environment they live in. Nowadays it is also open to anyone else, including tourists.

The Rainforest Discovery Centre is basically a natural forest prepared for people to walk through, discover and learn. There are walking paths of different length and purpose, some are cemented and some are just small hiking trails. While walking through the forest an open mind can learn about this habitat, its flora and fauna, spot animals like birds, squirrels or monkeys, and listen to the forests sound. Most exciting is the canopy walk which takes one high up to the tree tops and gives an entire different perspective and experience. Many animals and some plants only live up here. A botanical garden on-site educates about the plants that can be found in the forest and how the ecosystem depends on each part of it. The lake has a suspension bridge from where one can watch the birds fishing in the evening.

I absolutely loved to be in that forest, see the unfamiliar tropical plants, especially the massive trees, and listen to its sound. It’s really quite noisy! And it’s also really humid and hot, I was sweating as if I just had an exhausting workout. Always have a little pocket-size towel at hand (Thank you Judith)! I got an idea how it must feel being in the real jungle.  And I loved the spectacular views from the watchtowers into the green tree tops high above the ground.

The Sepilok Rainforest Discovery Centre features the oldest tree of Sabah – as far as we know: A 65m high Yellow Seraya tree whose age is estimated between 800 and 1000 years. Standing next to it made me feel really tiny and irrelevant. I learned that trees that are taller than the other trees of the main canopy are called emergents. Fun fact: The tallest emergent we know is 94m high. And  ALL of the tallest tropical trees in the world are found in Danum Valley and Tawau in Sabah, Borneo! Entrance fee is only 15 MYR and there is a café for refreshments.

For the Kinabatangan River Criuse I left Sandakan and moved for two days to the Sukau Sandipau Stay, a wild place at the banks of River Kinabatangan in Sukau. The transport was arranged by local people  and costs 50 MYR. See what happend and pictures from the amazing river cruises.