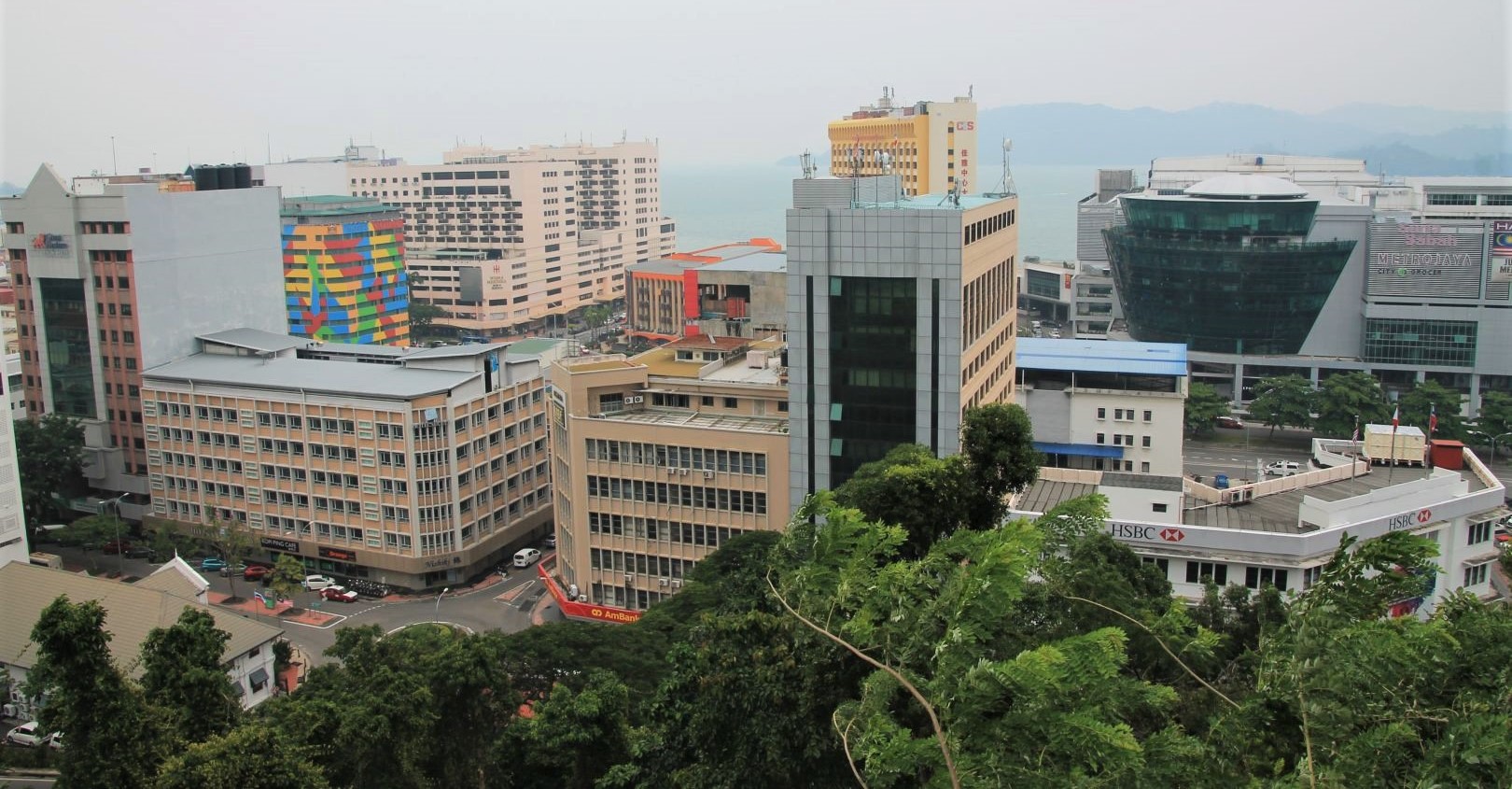 At the Foot of Mount Kinabalu

Kota Kinabalu is the capital city of the Malaysian state Sabah at the northwest coast of Borneo, East Malaysia. Formerly known as Jesselton, the present name of the city derives from Mount Kinabalu nearby. Mount Kinabalu stands at 4,095m above sea level which makes it the highest mountain of Malaysia. It lies in the middle of the Kinabalu National Park and is probably the most famous attraction for any tourist who chooses to visit the town. Hence most tourists – and that includes me as well – will aim to experience the diverse eco-system and the gorgeous flora or even trek all the way up to the summit. Challenging mountains always have an irresistible call for me.

On the other side of the town, just off the coast from Kota Kinabalu in the South China Sea, the Tunku Abdul Rahman Marine Park invites for Island hopping on five wonderful islands for activities like swimming, diving, sunbathing, or hiking. I myself have not done the island hopping. At the time when I was in Kota Kinabalu the weather was not in my favour and in addition there was that horrible haze that covered the sun, made the sky grey and the visibility poor and breathing unpleasant. The haze caused schools closing down and flights getting cancelled. The reason was the forest fires in Indonesia, affecting the entire Southeast Asian region, in addition to the local pollution. Funny enough, even in these circumstances it did not occur to anyone to stop pollution, hence all the lorries, buses and boats with their dirt-old engines proceeded blowing black fumes into the air and traffic on roads was as bad as usual.

Kota Kinabalu is a rather small city with only a few busy roads, some modern shopping malls and some traditional markets. The city centre stretches along and around Gaya Street and can be explored by foot. The main attractions are the Atkinson Clock Tower and the Signal Hill Observatory Platform. Kota Kinabalu has three impressive buildings which are unfortunately little outside the city centre. A car or taxi is needed to go there. I drove past but did not stop by: The huge Masjid Bandaraya Mosque, the impressive Kompleks Mahkamah Government Office and the eye-catching Che Sui Khor temple.

The Atkinson Clock Tower is one of the oldest buildings in Kota Kinabalu and was built to commemorate the city’s first district officer, Francis Gorge Atkinson. Since it was first erected in 1905 it was repaired several times, last time in 1959. The look of it today shows requirement for maintenance again.

The observatory claims to be the highest location in Kota Kinabalu but has long been surpassed by modern buildings. Nevertheless it is still a scenic spot and on a clear day the view will be great. When I was there the day was not as clear as hoped so that buildings further away as well as the islands were hidden in the grey haze.

Gaya Street in the city centre has plenty of little shops and hosted the Lantern Festival at the time I was there.  Also at the coastline  there are several markets, permanent as well as occasional. But honestly, I am not a big fan. It’s all polluted and dirty and it smells. Seeing mountains of wonderful fish and seafood on the markets, including many endangered species like stingray, and seeing crabs and fish trapped alive in plastic bottles for sale, and knowing they never sell it all that day, and it will all go into the ocean again, but dead; it breaks my heart. Seeing people cleaning their boats and their stalls with all rubbish and dirt going directly into the ocean, and seeing rats and cockroaches running between buildings, not scared of people anymore, in such numbers that actually rather people run away from them, seeing all this left me speechless in despair. It is disgusting, careless and irresponsible.

Of once extensive mangrove forest covering the entire area of Kota Kinabalu only 24 km² are left today. A conservation area has been formed, the Kota Kinabalu Wetland Ramsar Site. Currently it is home to 32 different species of mangrove trees. A wooden walkway of 1.5km takes one through the rest of the mangrove forest where crabs, birds and other animals can be observed.  Unfortunately, due to the tiny size of the park, the water that goes in and out here every day with the tides brings a lot of waste that was disposed into nature by the city nearby and the dense roots of the mangroves trap it like a fisherman’s net. Hence there is a lot of rubbish between the roots.  And certainly the city’s noises can still be heard inside the park. Nevertheless, it is still worth going. Entrance is 15 MYR.

Mount Kinabalu is the highest mountain between the Himalayas and New Guinea. No more than 185 climb permits are issued per day by Sabah Parks. I had one of them for the 12 September. I had carefully chosen a day forecasted with excellent weather and a clear sky to make sure to have the most beautiful view and best sunrise experience possible. But it all turned out differently.

I was picked from the hotel as early as 6am, driven by minivan to the Timpohon Gate at 1,860m and introduced to my guide Jo. I signed all the papers, got an ID card and my packed lunch, and off we went. The aim for the day was to reach the Panalaban Base Camp at 3,270m a.s.l. by latest 16:00. The way up stretches 6km of mainly stairs or rocky trails that look like wild stairs. The path leads through different zones of wonderful rainforest and vegetation which changes with the height. We had brilliant weather with only a few low hovering clouds but mostly sunshine. Our progress was fast. Every 500m there is a shelter and resting place and even toilets. We reached the base camp at 2pm and I had some time until dinner at 4:30pm.

During late afternoon and evening slowly the weather was changing. It was freezing cold and it got really windy, so much that some of the flagpoles broke. We went to the dormitories at around 6pm trying to sleep. At night we could hear the wind gaining strength and heavy rain pouring. At 2am in the morning everyone was gathering for early breakfast at the restaurant. The park ranger announced that we have to wait and see if weather conditions improve.  An hour later we got permission to attack the summit . And off we went, all at once in a long line up the stairs in the dark  and rainy night.  But not for long. As clouds settled, the rain did not stop and the wind was still strong the ranger closed the summit gate and we were all called back. I was very sad about it. We spent time until breakfast sitting on our beds talking and resting. I requested to stay for another try next day but my wish was not granted.

After breakfast at 8am we started to descent. The path was the same but as it was still raining, everything had changed. Now mighty waterfalls came down from the mountain where there was nothing yesterday, and even the trail itself had become a little stream. I got completely soaked. When we finally reached the Timpohon gate at around 1pm the rain had stopped, at least at this elevation. I got a certificate for reaching the base camp (great!), and for the two following days I had a good memory of the descent in form of muscle pain in my legs from the 6km downstair-exercise.  I must say that I was very disappointed that I had to leave the basecamp and could not try the summit on another day with better weather. I was physically in best condition and absolutely capable of succeeding. Now I have to book the same tour again and pay the same price, if I want to try again. And I won’t have any guarantee for permission to attack the summit.

And for the weather forecast: It was all wrong and quite the opposite. The forecast for the following days was really bad with rain and thunderstorm for the next 4 to 6 days. But when I took the bus to go to Sandakan on 16th we drove past the mountain and I could see the summit! Haze had lifted a bit and it was sunny and bright with just a few clouds! Lucky climbers on that day!