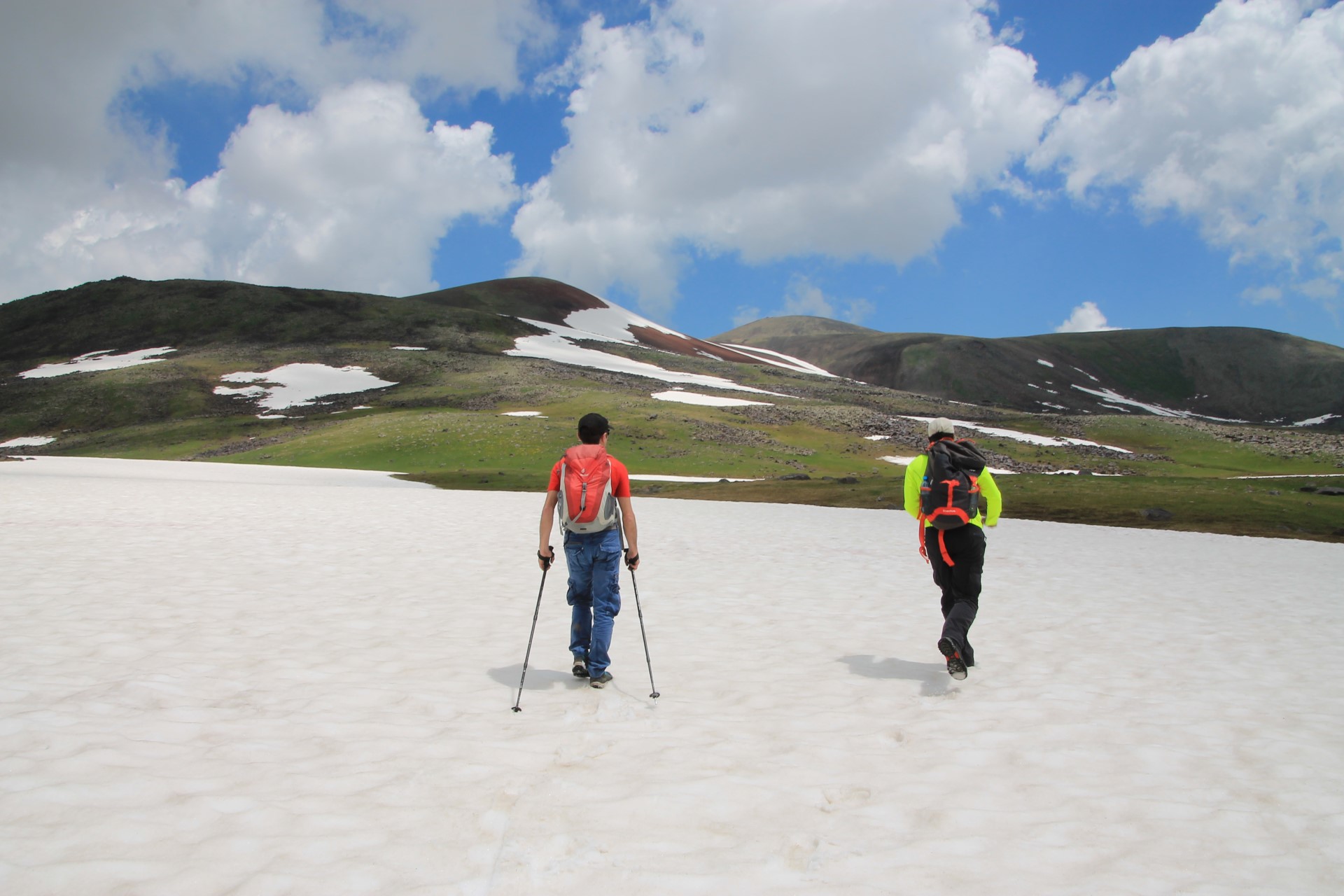 Between Yerevan in the west and Lake Sevan in the east there is a white patch of nothing on the map. That’s were the Geghama Mountains are.  Being tired of the noise and pollution of the city the Geghama Mountains promise a proper dose of wilderness and the feeling of being thrown back in time. The mountains were shaped by volcanoes, long extinct today, forming a fantastically beautiful and still nearly uninhabited landscape of wild rolling steppe, snow-streaked peaks and wheeling eagles. Its highest peak Mount Azhdahak measures 3,597m above sea level and holds an icy-cold, glass-clear lake in its crater, fed by the melting ice of the mountain. In summer the nomadic people of this region drive their cattle up the green mountains. Be warned of their dogs, they are big, strong and protective. It‘s said they kill wolves!

The highest peak of the Geghama Mountains is not difficult to climb and no special equipment is needed. Good hiking shoes, sure-footedness and stamina, water and food, and good mood will be sufficient.  The best time will be June as most ice has melted and the hills are coloured by flower-strewn grass, and temperatures are reasonably warm.

We started early in the morning, our guide Ruben picked us up from the hotel at 6am.  We left Yerevan northeast along the well-known road to Garni, continuing to Geghard, after which we entered the mountain range. The mountain road can only be mastered by a 4×4 vehicle, or – as we learned later – by a KAMAZ. And when it just became quite steep uphill on a rocky path the car suddenly steamed and spat water and gave up. And there we were early in the morning in a remote place with no tools, no human help around and no reception for a call. We soon found out that the problem was the pipe for water that cools the engine. It was an old tube and already broken some time ago but not replaced by a new one but fixed only temporarily. Having no other options we decided to hike around the place where we stranded and so that we would not waste the day. In that moment a big old KAMAZ came crawling up the track, loaded with people, very similar to our ride to the winery in Artsakh, guided by a local car, heading towards Azhdahak. These people magically had an old piece of tube with them, nearly similar size, and with the help of an old shepherd from the region we managed to temporarily fix the tube, and with some crystal clear water from the mountain we got the car going again.  We lost 1 or 2h but it was not too late yet to climb the mountain. We would later even catch up and overtake the KAMAZ-people and summit one hour earlier.

We parked the car on a green field near the track at an elevation of about 2800m. Ruben, our guide, was very fit and always many steps ahead. We walked through wild-flower meadows, climbed over rocks and stones, some of them showing old engravings, called Petroglyphs, jumped over small runlets of melting water, crossed massive fields of slowly melting snow and crushed stones. Three times we had to climb a mountain before we finally reached the desired highest summit of the Geghama Mountains.  It was an exhausting but fulfilling experience, and standing on that mountaintop, the nose right into the breeze of fresh air in midst of an infinite wonderland of green meadows, white snow and clouds, brown and black rocks and blue sky give a feeling of indescribable heroism.

After some picnic and a circular hike around the lake we descended. Certainly the hike back to the car was much faster. We avoided to climb the second mountain peak again that we had to climb to reach Mount Azhdahak because for the descent we found it possible to walk on loose gravel rocks. Very exhausted but happy we reached the car, stretched out in the green flowery grass and just felt in tune with nature. Happiness is sometimes so simple.

Summarizing, the hike took us 6.5h and we covered a distance of 13km, including a break of  1h on the top.  The elevation gain was about 700m but as we went up and little down and up again the total gain was 930m.

Despite the fact that we had lost some time in the morning we decided to have a quick visit at Geghard Monastery on our way back. I honestly thought I could actually skip visiting another monastery as I had seen a few already and found them very similar. But I am happy that we decided to go as this monastery has quite some uniqueness due to the way it was carved into the cliffs of the Azat river gorge and its surroundings. The monastery is listed as a UNESCO World Heritage site with enhanced protection. It dates back to the 12th century even though said that it was founded already in the 4th century. But nothing remained from that time. The churches, chapels and chambers are famous for their architecture including their acoustics, the cave housings, the cloth stripes for prayers along the path behind the church and across the little bridge and naturally for the beauty of the gorge itself.

Further down river Azat there is Garni Temple. According to our guide Ruben there is a beautiful hiking path along the river in the gorge from Geghard Monastery to Garni Temple passing the “Symphony of Rocks”. The hike is of no difficulty and only 8 to 9 km long. I guess also not too hot along the flowing waters. But as we had already some hike done we have waived at this one.