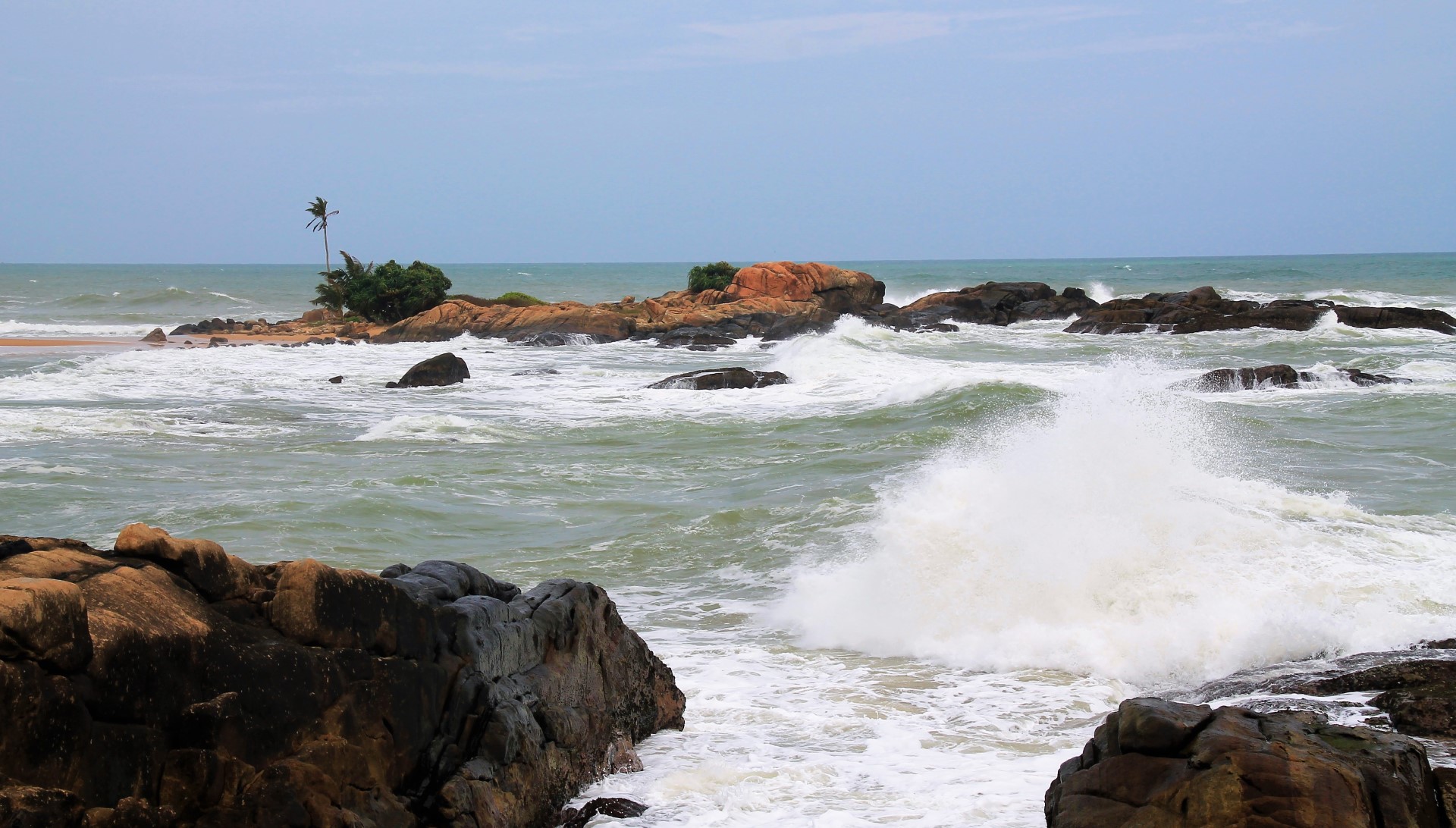 Hikkaduwa is a village at the southwest coast of Sri Lanka. As most other places it has one main road with shops, restaurants, bars and plenty of hotels. It also has a train station and a busy bus station that connect to Colombo as well as other places south and east. Like Arugam Bay, the area in and around Hikkaduwa has wonderful beaches with golden sand along the coast for kilometres. At the time we went, not many tourists were in Hikkaduwa. Hence, the two beautiful main beaches, Hikkaduwa Beach and Narigama Beach, where nearly empty. And so were most restaurants and hotels along the beach closed. I think Hikkaduwa in the west and Arugam Bay in the east are Sri Lankas top beaches, both with endless sand and mighty waves, Arugam Bay for Sunrise and Hikkaduwa for Sunset.

Things to do in Hikkaduwa

About 30km South of Hikkaduwa is one of Sri Lankas major towns: Galle. It can easily be reached by bus, train or Tuk-Tuk.  We took the bus because it’s fast and cheap. Galle is a very busy and vibrant place. Before Colombo took over, Galles harbour was the most important in Sri Lanka. The Dutch built a fort in order to defend Galle during the Dutch Sri Lankan colonial times, and the remains of the Fort can still be visited today. We went there for one afternoon and found it worth visiting. The massive walls , still standing, allow the view onto the ocean and the narrow roads are full of food, art and culture. It is nice, neat and narrow, a touch of old Europe on the island. All three religions live and pray in harmony here: there is a church, a mosque and a temple. The place is well preserved and maintained and I believe the UNESCO has made it World Heritage.

It is such fun to jump the waves, or to get thrown over by them, to swim a little at calmer locations or relax at the beach. But there are more things to do in Hikkaduwa. There is a coral reef not far from the coastline that can be reached by boat if waves allow. For underwater exploration there are glass bottom boats available and, even better, offers for snorkelling and diving.

The beach near the big Hikka Tranz Cinnamon Hotel has a natural protection from wind and waves so that swimming is possible here, even if the sea is choppy. It is also a good spot for surfing; and surf lessons are offered here. Most excitingly, at this spot many sea turtles come close to the shore and can be observed. People feed them with sea grass or something similar. I think over time the turtles have learned to come here for food. Tourists can get the sea grass from locals who usually collect for the tourists in hope for little donations. The turtles that come here are quite big Green Sea Turtles, I would say about 60-80cm in diameter. I had no idea about this until I accidently stumbled over one while swimming, first looking like a big rock but moving and then unveiling itself as a giant turtle.

For everyone who is interested or likes turtles, Hikkaduwa has a turtle hatchery. The place is about 5km north of Hikkaduwa beach. The people there breed turtles and keep them healthy until it is safe to release them into the ocean. The hatchery buys the eggs from people who try to trade them and have, highly likely, illegally robbed the turtles nests. They also take injured turtles from fishermen for treatment and healing. They help them to recover and will release them into the wild again.

Opposite to the turtle hatchery is a massive Buddha statue. Its height is 18.5m which is similar to the height of the big Tsunami wave in 2004. A little house nearby exhibits a small gallery of shocking photographs from the Tsunami and after. They still collect donations so we gave as well. Many people in this area have lost members of their family in the Tsunami, e.g. the operator of the Turtle Hatchery lost his parents and siblings. Little further north there is the Tsunami Museum but we did not go there.

Little south from the Hatchery there is a tiny, rocky Island, the Sinigama Muhudu Viharaya. It has a temple and some palm trees on it. In the sunshine the roof shimmers in a golden color. We were there on a stormy day and huge waves jumped against the islands rocks and walls.

Hikkaduwa has a huge salt water lagoon. I highly recommend going there. The place is quiet and peaceful and still in its original status, used only by fisherman for their traditional way of fishing. For exploration I recommend to go to the Hikkaduwa Lagoon View ECO Hostel. The people there are the only ones to provide a so called “Lagoon Safari”.  That means they take you on a traditional catamaran, built from the traditional fisherman’s boats, and paddle you around the lagoon. It`s an adventure!

We have discovered almond trees and mangroves, little flying fish and kingfishers, cinnamon trees and the monks islands , where no one else than monks can go. And we paddled into the roots of the oldest tree at the lagoon. It is so old that no one knows its real age. Best guess is around 500 years. There were no other boats on the lagoon, no surfers, no nothing, just  a few fishermen. No waves. It was so peaceful!

For now, it is still the way it always was in its natural beauty. But things are changing: deforestation has begun and the result of missing trees is that more sand and soil gets washed into the lagoon. Over the years this led to a considerable decline in depth, from 40m a few generations ago to 10m today.  One good thing: No mosquitos! The beasts do not like the salty water.  Good for us. It is absolute enjoyable to watch the sunset over the peaceful lagoon.

Opposite to the lagoon there is Dodanduwa harbour, just on the other side of the main road. Going there is another adventure. There are plenty of the traditional fishermen’s boats, the catamarans, lined up, waiting for release into the waters. Some of them are beautifully painted. There are really nice beaches on both sides of the harbour. At the harbour itself we climbed onto the rocks of the sea cliff and the mole and watched the mighty waves breaking. I was so fascinated I could have stayed there the entire day. Not far from it there is a little island formed by massive rocks and sand. The connection to the land is shallow so we waded through. We were the only ones there, only one fisherman came little later to do what we did: just sit and watch the ocean, feel the warm wind and listen to the sound of the waves. A grand feeling of freedom and live!