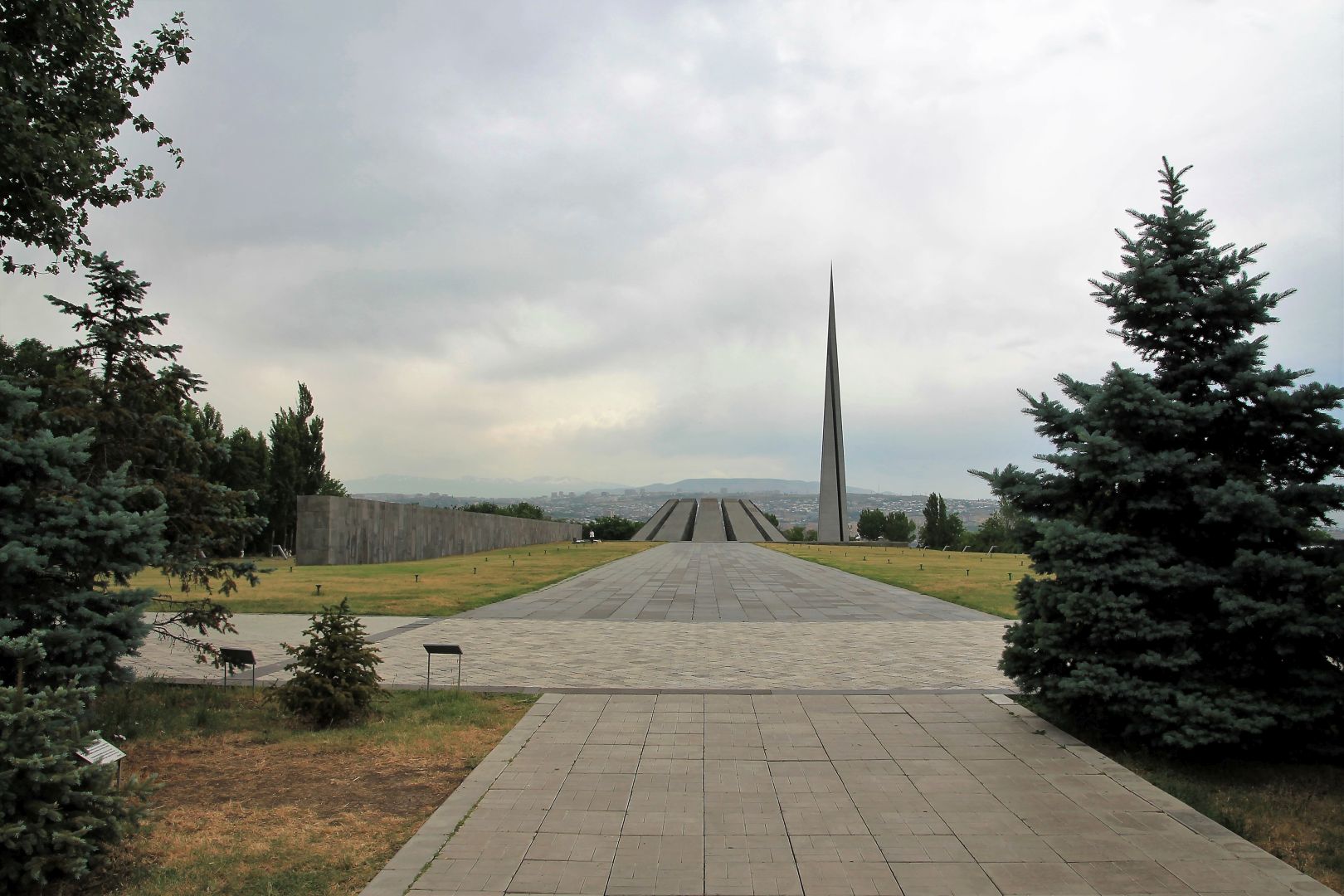 The Armenian Genocide: Memorial and Museum

Above the deep Hrazdan Gorge, on top of Tsitsernakaberd Hill, little outside the city centre,  there is the museum and the monument in memory of the massacre of Armenians by the Ottoman Empire. The museum is located underground and tells the horrific story of the events before, during and after the Armenian Genocide (1915 -1922), mostly by pictures , films and documents.  Entrance is free, donations are welcome. The memorial above consists of

The arrow-shaped column that reaches to the sky shall symbolize the survival and spiritual rebirth of the Armenian people. The vertical split symbolizes the tragic and violent dispersion of the Armenian people, and at the same time, expresses their unity.  The twelve inward-leaning slabs of the circular sanctuarity simulate traditional Armenian khatchkars (cross-stones), which also suggest figures in mourning. The level of the floor of the Genocide Monument is set at one and a half meters lower than the walkway and the steps down are steep so that visitors must bow their heads reverently while stepping down.

Completed in 1967, the Genocide Monument has since become a pilgrimage site for grieving and commemoration. It can be reached by Taxi, Bus or on foot walking uphill from the football stadium or alternatively from Leningradyan Street passing the Sports Complex on the west side of Tsitsernakaberd Hill.

What happend – Brief History of the Armenian Genocide

In the 19th century, as a result of the Russian-Turkish and the Russian-Persian war, Eastern Armenia went under Russian and Western Armenia under Turkish control. At that time, Armenians played a significant role in the Ottoman Empire especially in the banking sector, science, education and medicine. Also Turkish people preferred to educate their children with the Armenians. Armenian athletes represented the Ottoman Empire at the V Olympic Games in 1912. The advanced positions of Armenians triggered open dissatisfaction of the backward population of the Ottoman Empire resulting in massacres against Armenians and destruction of both economical assets and cultural heritage. The Ottoman Empire already had a long history of  violence against Christian populations which was expressed in mass murder, forced islamization, human taxation and looting . Muslim Turks enjoyed a status of ruling ethnic groups. Non-muslim people were considered subordinate. Hence the rights of Armenians were frequently violated. Armenian aspirations to preserve their language, religion and culture were hardly tolerated.

At the beginning ot the 20th century the Ottoman Empire was on decline. As a result of the Italo-Turkish war  1911-1912 and the following Balkan war 1912-1913 Ottoman Turkey lost all of its European territories except some regions around Constantinople (today Istanbul). The growing anxiety of the Turkish Elite, combined with the fear of further territorial losses, propelled a search for internal enemies as an explanation for the continuing decline of the Empire. The demand of Western Armenians to carry out reforms against new intensified violence was viewed as a threat. Armenians were also considered to be an obstacle for contacting Muslim populations in the Caucasus region. Early plans for ridding the Ottoman Empire of the Armenians emerged. The Young Turk Party leadership espoused the idea that the “salvation of the Turkish homeland” could be achieved only through the liquidation of the Empire’s Christian population. The central committee of the party developed a plan of action of the annihilation of the Armenian population. The plan called for deportation and concentration camps.

The suitable opportunity to carry out those plans was WWI, declared as Holy War (Jihad) on the side of Germany, fuelling fanaticism against Christians. What followed was the  systematic extermination of 1.5 Million Armenians, carried out in several stages. First the Ottoman authorities arrested and deported  Armenian intellectuals and community leaders, the majority of whom were eventually murdered. The next step was the large-scale killing of the able-bodied male population through massacre and subjection of army conscripts to forced labour; followed by the deportation of women, children, the elderly, and the infirm on death marches leading to the Syrian Desert. Driven forward by military escorts, the deportees were deprived of food and water and subjected to periodic robbery, rape, and massacre.

During the Genocide quite a few foreigners, including diplomats, reporters, soldiers, travellers and missionaries witnessed the destruction of the Armenian population. They described the acts by the Turkish Government against the Armenian population as a planned, premeditated and coordinated extermination.  Also the massacres were extensively covered by the international press, thousands of articles were published. Despite all evidence, until today the Turkish leaders have not recognized their crimes against the Armenians, not to mention any reparations, and even worse: they continue to  damage and destroy  Armenian places, churches , libraries, institutions  and settlements within their current territory.

MUST Visit – My View

Even though being constructed for commemoration, the place is located so wonderfully on the hilltop that I have been there several times, just to enjoy the peaceful atmosphere and of course the fantastic view onto Mount Ararat and the city of Yerevan. I have seen not only tourists there but also locals coming to remember, to lay down flowers and to commemorate in silence.  Also, please  show respect. It is not the place to do some posing for pictures or climb on things for whatever reason. People will not like it and tell you so. Better to bring a flower too.

I positively acknowledged that our  German government contributed a tree to the Memorial Forest, even if it was only in 2018.  As I learned, Germany was partially allying with Turkey and therefore we Germans are carrying responsibility too! Good to see that so many other leaders already contributed their trees so much earlier, and they are grown impressively.

Steep stairs lead down to the museum which is on two floors under the ground. I think it has been chosen like this to give an appropriate atmosphere and not to interfere with the monument. The light is dim and the colour of the walls mainly dark.  50 numbered information boards lead through the exhibition, going step by step through the history before, during and after the Genocide, the correlating historical events and  the involved people both victims and culprits. Unfortunately the writing is rather small and sometimes hard to read in the dim light due to missing contrast to the background. But every board is richly illustrated with pictures, books, newspaper copies and other documents of the time. It’s a lot to read so please bring some time.

Please expect to be shocked and moved, expect to feel the pain and desperation of those victims and expect also to encounter rising anger, not only with those responsible but also with those who knew and let it all happen remaining inactive. That’s what I felt. It is ok to take a break and come back a later time. That’s what I did.

The worst part for me was to find so many parallels to current events, as if we had not learned from it. That people continued doing the same horrible crimes as reported from this Genocide in the following years until today, that we still doing the very same things in other parts of the world, now! And yet again it happens unnoticed or, if noticed, we are not successfully stopping it, some of us even support: the imprisonment of the intellectual leaders of a society, strict censorship, concentrations camps, deportations, medical experiments, violence especially towards kids and women, rapes and pure lust to kill hurtfully, the forced change of religion, the denial and the lies to justify,  the ideology of lower and superior human beings.

I will not go further into those horrific happenings, please go and see.  Let me finish with John Lennons Imagine.  “Image there no countries …nothing to kill or die for, and no religion too! Imagine all the people living life in peace! “I hope and trust one day we will be there.