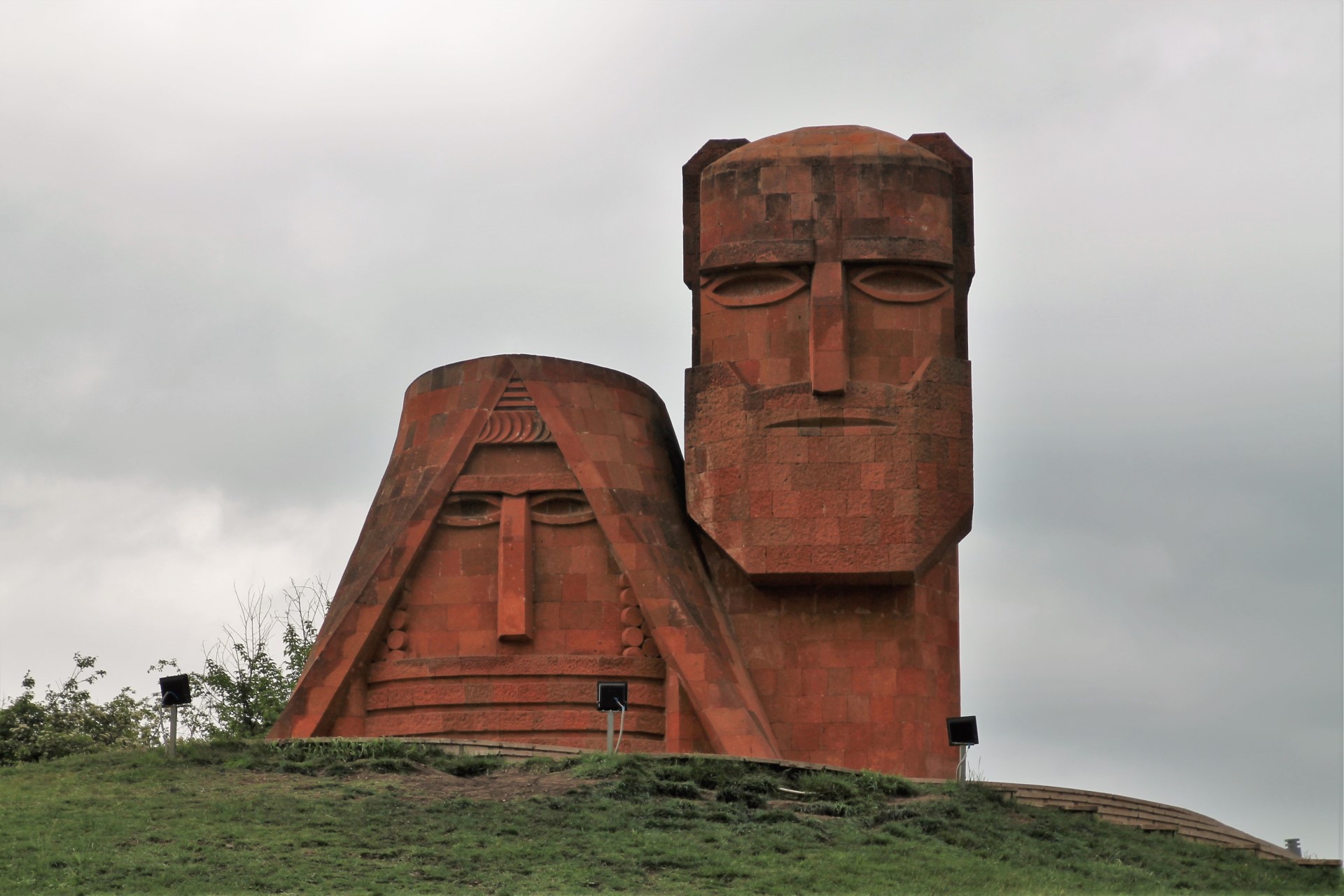 The Volunteer Corps AVC and Birthright Armenia took their volunteers for a 4-day weekend trip (10 -13 Mai) to the Republic of Artsakh. Every year this excursion is the absolute highlight. To go to Artsakh usually requires an entree visa. Going to Artsakh also needs awareness of the political instability including the presence of armed forces everywhere throughout the region. The interest in participation and having the chance to explore Artsakh was immense, and so we ended up with 65 volunteers plus the staff from the conducting organisations, squeezed into two busses and 6 or 7 homestays in Artsakh. However, it was worth going!

The region of Artsakh and in particular Nagorno Karabakh has a turbulent history. I don’t want to go too much into detail as there are plenty of sources for detailed historical information. Just a very brief glimpse, not reaching further back than the beginning of the last century where the current conflict seems to have its roots: a decision made by Stalin after the Russian revolution. At this time there already was a dispute between Armenia and Azerbaijan regarding specific regions including Nagorno Karabakh. Located right between Russia and Turkey, Armenia and in particular Nagorno Karabakh was strategically important as it was in the way of interests of its neighbours.

Shortly after the revolution, when Azerbaidshan and Armenia became part of the Soviet Union, the Armenians hoped that Nagorno Karabakh would become part of their country. But Stalin had other plans and especially wanted to please Turkey in order to pursue their own plans with them. So decision was made to establish Nagorno Karabakh within the SSR Azerbaijan. During Soviet times the conflict died but after the Soviet Union dissolved the conflict re-emerged. The ethnical cleaning that had been tried, meaning to get rid of Armenians and support settlement of Azerbaijanies, had failed. Armenia made several petitions, all failed. A referendum held in Nagorno Karabakh overwhelmingly voted for joining Armenia. It was not heard. At the beginning of the 1990s the situation escalated into a war causing death and damage on both sides. In 1993 a ceasefire was negotiated through Russian intervention. At that time Azerbaijan had lost considerable territory east of Nagorno Karabakh, the ceasefire brought those losses to a halt and Artsakh emerged within the borders that we see today.

The war itself has not officially ended, the Republic of Artsakh is internationally not recognized. The ceasefire has calmed the conflict but an agreement for a solution has not been negotiated. As we learned, there is still gunfire along the border, not only in that region of Artsakh but also along the northern border between Azerbaijan and Armenia, and another 4-day war has been fought in 2016 when Azerbaijan launched an offensive into Armenian territory. The threat of another war is present to today. People here say that only their strong armed forces everywhere along the Armenian border prevent Artsakh from disappearing.

Today – as before – Artsakh people are mainly Armenian. They have their own government, speak Armenian, the currency is DRAM and the banking system is Armenian. The cities in Artsakh have Armenian names: the capital city is called Stepanakert. The laws are very similar to those in Armenia. The soldiers defending the borders are also Armenians. Two years of military service is a must for every 18 year old boy in Armenia, and many of them serving in Artsakh.

On google maps the Artsakh region as part of Azerbaijan, as once decided by Stalin. Certainly the reality is different. Armenian maps show Artsakh as part of Armenia. But Azerbaijan will never let go of this region. It would put them at risk that other ethnic groups in Azerbaijan might rise and require autonomy too. Certainly there is hope for a peaceful solution. But Armenians won’t, under no circumstances, give up their territory that they inhabiting. And for that they will fight. All families in Artsakh today were involved in that war and have suffered losses. It is very recent history. And so, everybody will stand up and fight again. Neighbours are still considered to be enemies. There is a very deep nationalistic enthusiasm incorporated in their minds. They call it their Armenian DNA.

On our first day we had the chance to meet Davit Babayan. He is the Spokesperson of the current Artsakh government and also the founder of the Artsakh Conservative Party. He is not only a very enthusiastic and authentic person but also a very well educated academic with a PhD in history. He gave us a 2h presentation about the history of the region Artsakh and a detailed view onto the causes of the current unsolved conflict, followed by a QnA session. It has been very interesting and I can not imagine anyone else so well informed and skilled to present historical facts and their correlations. I recommend to anyone interested who plans to go to Artsakh to try to meet him.

Davit Babayan said that they have learned from their past and the war that efforts to become independent have not been a good idea. This is no longer their goal as they understood it will not be working for them. He said, that they cannot change what happend in the past. They shall accept it and from now focus on the future to make it better and peaceful – within the region they inhabit of course.