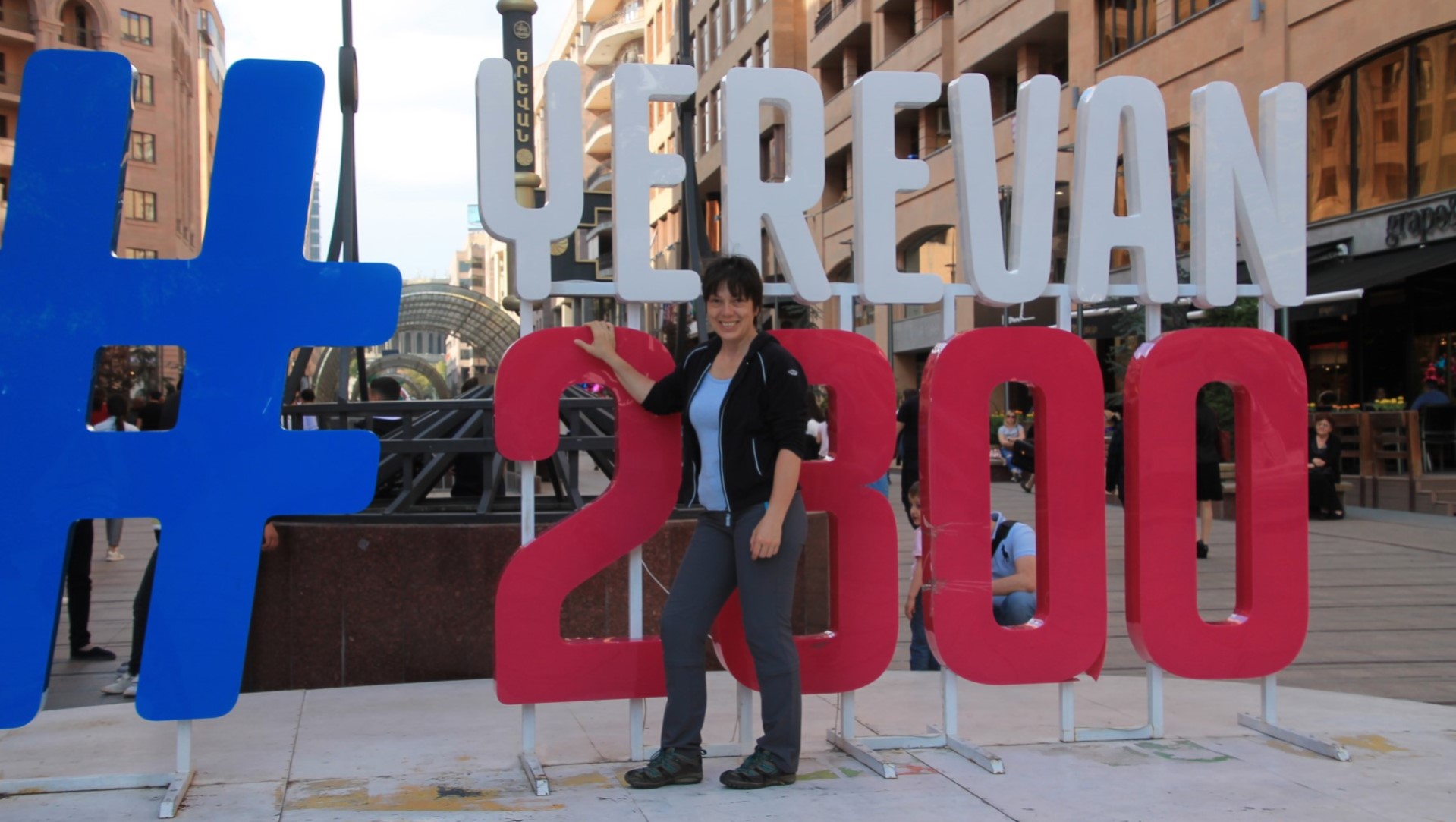 Considering it would be a good idea to have a first look around for orientation. So I went for a short sightseeing through the city centre. All interesting points can be reached on foot. The city is surprisingly busy, plenty of people, both tourists and locals, and even more cars, stuck in traffic. Eventhough it was 1st May and Labour Day there was nothing apart from a very small demonstration of about 50-100 people for better living conditions and work (what I understood from Marinas translation).

Starting at the Metro station near the Republic Square with it’s impressive fountain I turned left into the park that hosts an open air exhibition of khachkars (cross stones) from places all around the country. Going straihgt I passed the monument of Garegin Nzhdeh (Armenian statesman) and entered the Vernissage, a big market of traditional Armenian art and craft. At the statue of Vardan Mamikonyan (Armenian military leader) I turned around and went back to the Republic Square with it’s wonderful fountain in front of the Historical Museum & National Gallery.

From here I went south where they have a nice park with little fountains shadowed by huge plane trees and nice cafes on both sides. In the flanking streets one finds the Ministry of Finance, the Ministry of Education, the Central Bank and at the end a memorial of a revolutionist at Shahumyan Square. Turning around here I followed Abovyan Street which turns after few hundred meters into Yerevans new shooping mall, the Northern Ave. It seems that old Yerewan citizens do not like it as it lacks trees, green in general, and buildings are said to be ugly. From my point of view, yes, I missed some green here too but the buildings are all right.

Reaching Freedom Square with the impressive huge Opera House and the beautiful Swan Lake I went around it to climb the stairs of the Cascade up to the huge concrete platform. From here the view is amazing. Unfortunately Mount Ararat was covered in mist and clouds and its presence could barely be sensed. But on a clear day when that mountain presents itself behind the city rising massively into the sky the view must be stunning.

From here it’s only a short walk through an amusement park (yes, with Ferris wheel again) to the statue of Mother Armenia. In front of her is a memorial with an eternal flame and around her plenty of military equipment like tanks and guns, even a fighter jet , all part of the Military Museum. I recommend watching the sunset from here – or sunrise if you like. My day trip finished on the Charles Aznavour Square and the impressive Moscow Cinema , which brought me near Marinas place with dinner waiting.

More to see in Yerevan